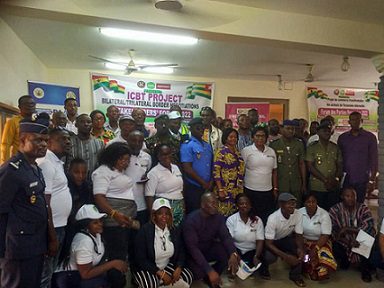 The Union of Informal Workers’ Associations(UNIWA) of Trade Union Congress (TUC), Ghana, and FAINATRANSIT of Togo in collaboration with Streetnet International have held a stakeholders negotiation forum to stop the harassment and over-taxation of informal workers involved in cross-border trade.

The rationale behind the programme is to create enabling environment to advance the cause of Informal Cross Border Trade(ICBT) and work in synergy to achieve socio-economic development.

Mrs. Deborah Freeman Danquah, the General Secretary of the Union of Informal Workers’ Associations(UNIWA) of TUC, Ghana said the State and its policymakers on one hand, and informal economy operators and their associations, on the other hand, differ on the objectives of formalisation of informal economy and the approaches towards it.

Such divergence according to her had something to do with limited engagements among social partners, detracting from the national efforts towards transitioning from the informal economy to the formal economy citing ICBT as an example.

Recognizing that key stakeholders and social partners are working in diverse ways to achieve formalization, she said, there is therefore the need to work in synergy hence the need for the forum to build consensus on issues of the informal economy for combined action and greater achievement.

It is hoped that formalisation of the informal economy presents an opportunity to address the many decent work deficits that we face in the formal economy.

For public authorities, the formalisation of the informal economy is expected to make their regulatory functions less cumbersome.”

The forum which was held at Aflao in the Volta Region was themed, “Creating Enabling Environment for Informal Cross-Border Trade: The Role of Stakeholders.”

A cross -section of informal economy workers who spoke at the forum says they face violence, harassment, and over-taxation from officials in Ghana and Togo hence the use of unapproved routes.

ASI Theophilus Oteng Pabi of the Ghana Immigration Service in swift response to the plight of the informal economy workers appealed to them to work closely with his outfit by holding any approved national identification cards to facilitate cross-border trade.

He also urged informal economy workers to seek the help of Ghana Embassy officials in Togo when they face challenges in the movement of their goods.

ASI Oteng Pabi advised informal economy workers to always move in groups and change their money in the presence of officials of Ghana Immigration Service so that there are not robbed by criminals masquerading as “goro boys.”

Mr. Kpetigo Agbessi of the Togo Immigration Service in his remarks said their cardinal aim is to promote cross-border trade by making sure that workers of the informal economy and stakeholders use genuine papers and not fake papers in their bid to transact business.

According to him, they would make sure that only goods that are certified to cross the border do so, stressing that, drivers with genuine permits would be allowed to cross the Ghana and Togo border.

3rd ECOWAS Forum on Education for the Culture of Peace ends in Lomé, Togo

Togo set to host 3rd Edition of ECOWAS Forum on Education for Culture of Peace through Intra, Inter Religious Dialogue

Ghana triumph over Togo and Benin to defend All Veterans Championship title.

GFL calls on labour unions to turn attention to policymakers

The Girl Child: “Our Rights Our Future, The time is now!

Togo to host 3rd edition of the ECOWAS Forum on Education