The forest which served as a natural cover for a coalition of GaDamgme warriors in a battle which saw the eventual defeat of an Asante exploratory force in August 1826, can boast of rare plant species and trees aged over 500 years. 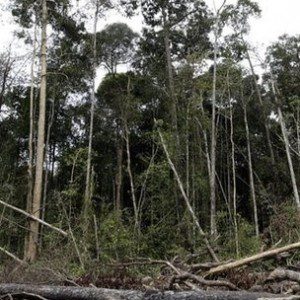 Mr Renner Kwesi Awatey Noah, Special Aid to Drolor Bosso Adamtey I, Suapolor of the Shai Traditional Area in the Shai-Osudoku District, told the journalists that some unscrupulous persons were indiscriminately chopping off highly treasured trees in the forest.

Mr Noah said if the various ministries, the Police and other stakeholders do not urgently intervene, the whole forest would be depleted soon by their illegal activities.

He further questioned that “when are we going to regrow these rare trees that have been in the forest for over 500 years”.

He added that apart from the felling of the trees, some people were also constructing houses in the Dodowa forest, a situation he described as “disturbing”.

The Special Aid said apart from its negative impact on the environment, the depletion of the forest would deprive the Shai people of their history, values and culture.

Mr Noah also called on the Greater Accra House of Chiefs to add their voice to the call for the protection of the forest as the offices of the House were located some few metres from the forest.

He said the traditional council was prepared to use dialogue and legal means to ensure the protection of the Dodowa forest.
GNA/www.newsghana.com.gh