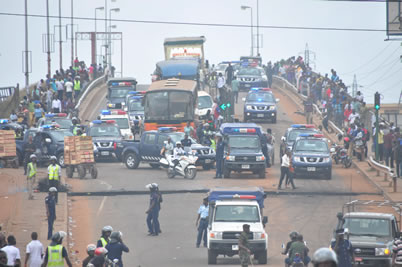 The ugly scene caused temporal vehicular and pedestrian traffic as most people who have been denied the opportunity to watch boxing due to COVID-19 either slowed-down their cars or even stopped to catch a glimpse of the action.

The two-street boxers choose a strategic location conducive for boxing, the passing lane in between the dual carriageway which connects the roundabout, creating a resemblance of a boxing ring and aggressively traded the punches.

An argument ensued between them which moved from various stages with other hawkers serving as mediators but the two kept their rigid positions, refusing to allow peace to prevail and eventually entered the boxing area to settle it.

The fight eventually ended when some pedestrians and hawkers lashed them with cane and belt, the intensity of the beatings forced them to abandon their street boxing.

Intriguingly Mohammed Ali one of the fighters, not the legendry Boxing Hero explained to the GNA Tema team after the fight adjudged it a draw that on the day of the celebration of the holy feast “Eid Fitr,” that his friend the other boxer run away after consuming the food without washing the bowl”.

He said all attempts to get him wash the bowls proved futile, which laid the foundation for the intermittent argument between them since then and eventually leading to the fight.