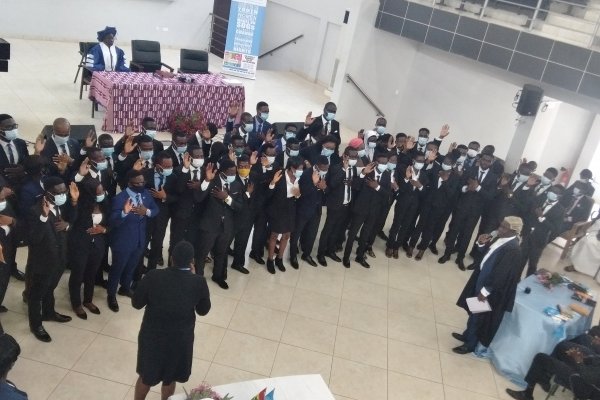 The Leadership of the United Nations Youth Association-Ghana (UNYA-GH) has sworn into office 132 shadow Youth Ministers.

The youth wing of the United Nations Association also sworn-in 275 Members of Parliament, including a Speaker and 15 Clerks of Parliament.

The shadow Ministers, together with the MPs and the Clerks, were administered with the Oath of Office to abide by the rules and regulations concerning the United Nations.

The youth Parliament will operate like Ghana’s Parliament but the focus will be solely on the discussion of youth development.

Frank Paa Kumi, the Director of Passionate Africa Leadership Institute, speaking at the ceremony, urged the youth to build capacity as young people, who aspire to occupy leadership positions in future.

He said there was the need to pay particular attention to the type of books they read, the event they attend and the set of people they decide to associate.

“Your environment can shape and feed onto your passion,” he said.

He said a lot of people in leadership positions have not submitted themselves to proper capacity building and they have not nurtured themselves into most of the offices they occupy.

“If we continue like this as a country, we will keep facing leadership challenges,” he added.

Mr Kumi said most leadership challenges could also be attributed to the leaders not having mentors or not going through mentorship processes.

He called on the youth to volunteer the time and resources in serving the society, indicating that sometimes volunteerism and flexibility creates values.

He, therefore, called on society to reward exemplary and ethical leadership to motivate the younger ones.

Madam Lilian Sally Addo, Country Head UNYA-GH, called on the youth to join the right Associations and should not be scared of joining the youth wing of the UN, because of the recent issues with ‘Dr UN Awards.’

She said it was to enhance the participation of Ghanaian youth in the decision-making process at all levels; while increasing their influence on national development and international cooperation.

Mr Kwame Adu-Twum, a Security Expert, urged them to tolerate each other despite their party affiliations.

He called on the government to equip the youth to enable them to be engaged and have something to do rather than involving in conflict.

He also cautioned the youth not to allow themselves to be used by politicians to fuel misunderstanding and conflict in society with the coming of the December 7 elections.

The UNYAGH is a not-for-profit membership-based organization founded by Bishop Peter Kojo Sackey.