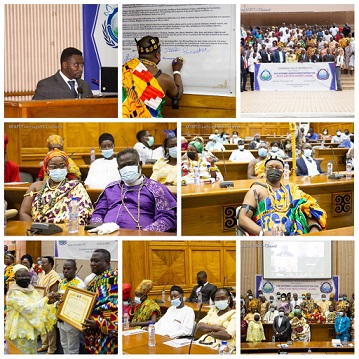 The Universal Peace Federation (UPF) Ghana has taken another giant step by launching the Ghana Chapter of the Interreligious Association for Peace and Development (IAPD) in Accra.

The event was held virtually under the theme: “The Role of Religious Leaders towards Peace and Security in Ghana and Africa,” attracted prominent personalities to share thought on how to help promote global peace.

In all, seven others were also awarded as Peace Ambassadors to help champion the cause of global peace.

The Secretary-General, of the Universal Peace Federation (UPF) Ghana Dr. Helen M. Osei (Mrs) speaking at the event, noted that world peace can be attained only when the endeavors of the world’s political leaders are supplemented by the wisdom and efforts of religious leaders.

Hence there was the need to launch the Ghana Chapter of the Interreligious Association for Peace and Development (IAPD) in Ghana.

“The Interreligious Association for Peace and Development (IAPD) is one of the primary associations of the Universal Peace Federation (UPF) formed to help address crucial issues that would help promote and ensure lasting peace in the country,” she elucidated.

Dr. Helen Osei, however, entreated all and sundry especially the newly ambassadors not to stay aloof in the cause of promoting peace in the country.

In a statement read by Mr. Robert Poku Kyei, on behalf of the Senior Presidential Advisor, Hon. Yaw Osafo-Maafo noted that the struggle for peace is a collective responsibility of all and sundry.

Stressing that, there was the need to take into account the myriad of religious intolerance that is creeping into the body politic of many African states, in recent times.

This he said the Sahel countries, including Burkina Faso, Mali, Niger, Chad, and Mauritania, have had experiences of violent religious extremism, unfortunately leading to terrorism and destruction of lives and property.

“To the West of Ghana too, has suffered insurgency by intolerant elements of religious extremists. These are evident in the Ivory Coast, Liberia Sierra Leone, The Gambia, Senegal, among others. Nigeria, Benin, and Togo to the East of Ghana have not been left out of the violent destructions.

We are all aware of the ravages of Boko Haram in the sub-region of West Africa. Religion has, unfortunately, been used as a tool for violence instead of promotion of peace and development, in these countries,” he disclosed.

Ghana has, however, been spared largely from the unfortunate consequences of religious intolerance.

So, it is in this regard, there is a need for us as a country to always join faith-based organizations in the cause of promoting peace.

More so, it is in this vein that I condemn in no uncertain terms the so-called prophesies particularly before general elections, predicting electoral outcomes, with the potential to divide the country.

According to him, the government will continue to create platforms for actors in the peace architecture to share knowledge and ideas that will facilitate the prevention, management, and resolution of conflicts.

And also empower peoples of all origins, faiths, and beliefs to play their roles effectively for tolerance for divergent views and peaceful coexistence.

However, he, therefore, called on all religious leaders to conduct their activities with the highest circumspection, and responsibility, to ensure that in the exercise of their religious freedom.

Adding that, they should not undermine and violate the rights of others, nor derail the peace of the country.

The Co-chairman, Srivas Das – Zonal Head of the Hare Krishna Movement who spoke on behalf of the IAPD National Chairman, the National Chief Imam Sheikh Dr. Osman Nuhu Sharubutu described peace and security as essential prerequisites when it comes to the development of a nation.

This he said, in order to achieve peace religious leaders need to liaise with the administrative class, the political leaders to formulate principles, systems, and processes for the education of the masses.

Adding that Religious leaders and the business class will have foster a relationship towards achieving this goal.

The working class cannot be left out of the equation for the creation of peaceful coexistence within our communities, for they form the majority.

“We thank Dr. Mrs. Hak Ja Han Moon for giving birth to this idea, which is taking shape throughout the world and which is happening in Ghana today by this inaugural ceremony,” he applauded.

The Regent of Katamanso, Nii Laryea Afotey Agbo, in a brief remark, noted that he has been pondering over the manner in which the world is steadily losing all the fibers of a peaceful society.

“Everyone is yearning for peace and desires to experience it at all times. But the big question is how can we achieve it,” he quizzed.

This he said, religion has never conflicted with peace, but its followers have. Since religion is one it is the sects that are many. We the followers have chosen to do propaganda with the doctrines; creating chaos in the world.

The Regent, therefore, entreated the world to eschew destruction and discrimination and rather be agents of peace.

UPF is made up of an international and interreligious network of individuals and organizations, including representatives from religion, government, civil society, and the private sectors dedicated to achieving world peace.