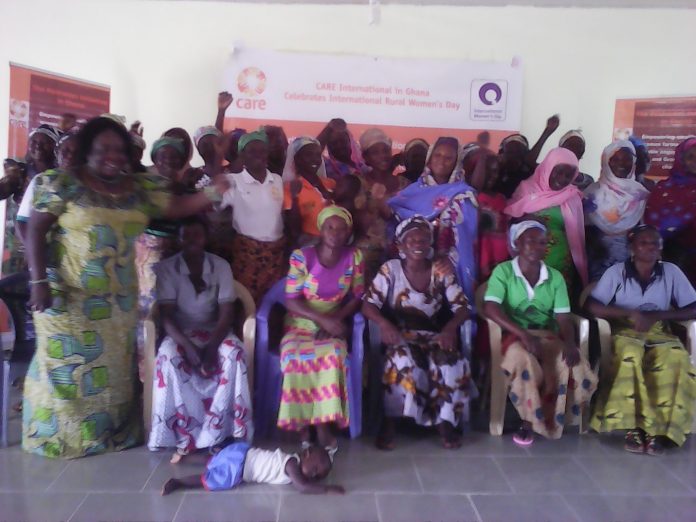 The Day which was instituted by the United Nations (UN) and celebrated on October 15 each year is used to recognize the role of rural women in contributing to improving food security and eradicating rural poverty worldwide.

It was organized by CARE International and held on the theme: “The critical role and contribution of rural women in enhancing agriculture and rural development, improving food security and eradicating rural poverty “.

The event attracted many women’s groups, traditional and religious leaders, Mr Albert Alalzuuga Akoka, the District Chief Executive and staff of the Assembly.

Madam Agnes Loriba, the Project Manager of Care International in charge of the Pathways Initiative Project, said though rural women contributed immensely to the agriculture sector, they were not adequately supported, hence, the need to strengthen the collaboration between traditional leaders and the rural women in the effort to access land.

She said supporting rural women to invest in agriculture and other business ventures of their choice would not only help in contributing significantly to increase household food security, but would also help reduce poverty in the society.

“Creating an enabling environment that encourages the private sector to provide financial services, legalizing the work of rural farmers with clearly defined remuneration and good conditions of services are key to the empowerment and the improvement of the livelihoods of the rural women”, she said.

She said for the past 20 years, CARE International through the Pathways, Adaptation Learning Practice and Micro Lead Projects, has empowered many rural women in the Garu-Tempane District.

She said the Pathways project has supported over 3,000 smallholder women farmers to go into soya-bean and groundnut farming.

She said through the Pathways intervention coupled with the Micro-lead project known as the Village Loans Associations (VSLAs) and the Adaptation Learning project, many women were able to engage in other petty trading activities and to also plant their crops at the appropriate period.
Mr Albert Alalzuuga Akoka, the DCE for the area, said if women were economically empowered, it would benefit households and the society as a whole.