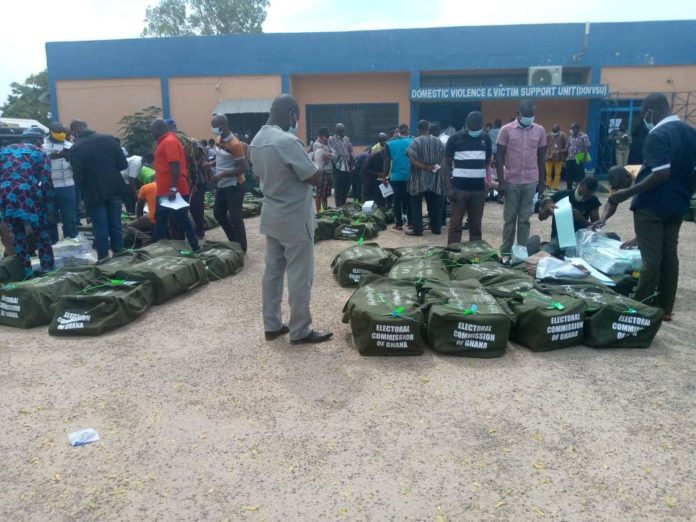 The Upper East Regional directorate of the Electoral Commission (EC) has received its share of the election materials for the 2020 Presidential and Parliamentary polls on December 7.

The materials, which included; ballot papers, ballot bags and the Biometric Verification Devices among others were received in the presence of officials of the EC, the Ghana Police Service and the political parties.

All but Biometric Verification Devices (BVDs) for five Constituencies which would arrive later according to the EC, were received and inspected, counted and certified by all stakeholders including political parties.

The materials have been kept in a building at the Regional Police Headquarters, however, the arrangement to keep the materials in the said building aside the Police Armoury was not well received by the political parties who insisted on also putting their padlocks on the building.

Speaking in an interview with the Ghana News Agency Alhaji Amadu Mogtar, Regional Research and Elections Officer for the New Patriotic Party (NPP) said the materials were counted and it was up to the number and were all sealed and serial numbers were intact.

He said for the previous elections particularly in the Upper East Region, materials were usually kept in the said building, however, the various political parties were allowed to also use their padlocks to lock up the building.

“This has always been the practice anytime the materials were not stored in the police armoury but the EC did don’t want us to put our padlocks there,” he added.

Mr Donatus Atanga Akamugri, the Regional Secretary of the National Democratic Congress (NDC) noted that the parties especially the two major political parties were not satisfied with the arrangement and protested which resulted in consultation between the Regional EC officials and their superiors.

Mr Worlanyo Mensah Tegah, the Deputy Regional Director of the EC told Ghana News Agency that the practice to allow political parties to also use their padlocks to lock the building in which the election materials were was not constitutional and violated the electoral laws.

“After inspection of the materials, the mandate of the political parties ends, it is the police that the materials are entrusted in to keep them safe,” he said.

He however, stated that after consultation, it was agreed that for peace to reign the political parties should be allowed to use their padlocks on the door of the building and added that the parties were debriefed accordingly and the issue was resolved.