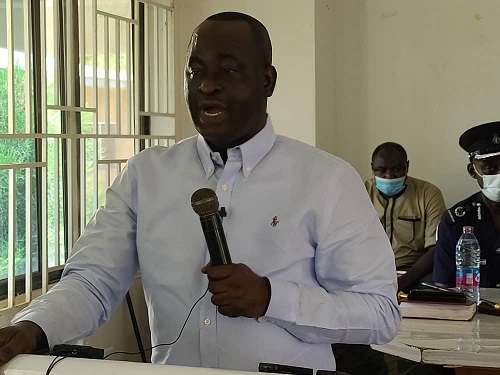 The Upper West Regional Security Council (REGSEC) has imposed an indefinite curfew on the movement of fertilizer and other farm inputs in the Sissala East Municipality and Sissala West District of the Region.

Dr Hafiz Bin Salih, the Chairman of the Upper West Regional Security Council, said the measure was to stop the practice of smuggling fertilizer out of the country to ensure that local farmers in the Region had enough to purchase.

“No vehicle will be allowed to carry fertilizer in the Sissala East and West area and those intending to buy in large quantities must do so with a police escort. All fertilizer movement must be done within 6AM to 6PM.”

Dr Bin Salih said this at the weekend during a meeting with input dealers and other stakeholders at Tumu as part of measures to safeguard agricultural activities in the Upper West Region.

He expressed remorse over the engagement of citizens in illegal smuggling of fertilizer to neighbouring countries like Burkina Faso, especially from the Sissala West and its neighbouring areas, which, he said, was an impediment to the progress of agriculture in the country.

“It’s disheartening to note that intelligence got to us that smuggling was taking place, particularly in the Sissala West, and we got alarmed as some 45 Rhino truckloads of fertilizer, each carrying about 300 pieces of fertilizer, were carted into Burkina Faso” he said.

“The scale of the act of smuggling led to the Ministry of Agriculture withdrawing names of dealers who had records of dabbling in smuggling in previous years.”

Dr Bin Salih, who highlighted other measures to safeguard agriculture, said: “All farm inputs coming into the region must first report to the Regional Coordinating Council for us to know the vehicle, the quantity, and the destination, once they get into the Sissala area, we expect the consignment to be offloaded into shops and sold to the public”.

“Anyone found flouting this rule will have the fertilizer confiscated, sold and the vehicle involved impounded and auctioned.”

He described as embarrassing and unacceptable the situation where Ghanaian fertilizer flooded the Burkina Faso market, despite the support government was giving to farmers since the Planting for Food and Jobs had had a positive impact on the people.

“Some of you want to stab the nation at the back and this has become a security threat, we will, therefore, not allow you to endanger the lives of Ghanaians by taking fertilizer to our neighbours all the time, and should these measures not work, we will introduce more to refrain you from this unpatriotic act,” he warned the perpetrators.