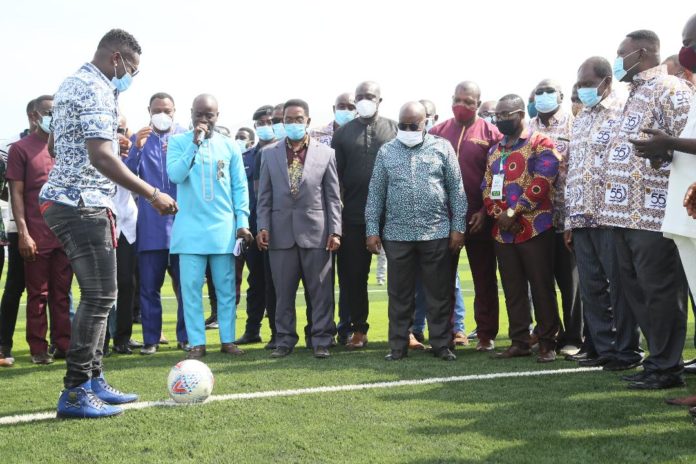 He said the facility would also go a long way to encourage students to improve upon their performance in sports.

The project was funded from the University’s internally generated funds at a cost of GHC3,888,016.00 and was constructed by Wembley Sports Construction Company Limited.

Prof Amartey said at UPSA, sports was one of the extra curricular agenda areas they hope to further promote; stating that a global study found a link between one’s fitness and academic performance.

“We share the combined views of Nelson Mandela and Billie Jean King and believe that not only does sports have the power to change the world, it inspires, unit, teaches you character in readiness for the challenges life will throw your way,” he said.

“And this why we deliver holistic education by developing both the brains and talents of our students.”

He said the UPSA Astro Turf falls inline with the University’s vision to harness the sporting potential of their students and encourage individuals with sporting talents to make UPSA a learning institution of choice.

He recounted that early last year, Management of the University set-up a four-person sports committee to help drive their sporting agenda; adding that “little wonder we are seeing improvements in UPSA’s overall performances at inter-universities games in recent times”.

Prof. Amartey said the University was opened to the community and that even though the facility was located on the UPSA premises, it would be open to the Community for identification and development of hidden talent, who would one day represent Ghana and bring laurels to their dear country.

With regards to the global ranking of universities, the Vice-Chancellor said the 2020 U-Multirank global universities rankings had listed the UPSA as one of the top universities in the world.

He said the 2020 edition of the U-Multirank features 1,759 universities from 92 countries and provides a common platform for participants to compare with each other on a like-with-like basis.

He noted that it also assesses universities on a multidimensional approach to higher education, including teaching and learning, research, knowledge transfer, regional engagement, and international orientation.

He said the ranking also placed UPSA as one of the top two universities in West Africa on the list which had 23 universities from nine countries making it to the master list of universities.

The Vice-Chancellor said the UPSA had also retained its position as one of the best three universities in Ghana in the 2020 Global Times Higher Education University Impact Rankings, which assess universities against the United Nations’ Sustainable Development Goals (SDGs) balancing their scores across broad areas such as research, outreach, and stewardship.

He said it was significant to note that to ensure unrestricted access to university education in Ghana, the UPSA had not increased fees over the past four years.

He said additionally, their Vice-Chancellor’s Endowment Fund, established to support brilliant but needy students, had continued to provide scholarships for deserving students.

“In the coming year, we are hopeful that we will be able to award 55 scholarships to brilliant but needy UPSA students, notwithstanding the adverse impact of COVID-19 on the Endowment Fund,” he said.

“The 55 represents our 55th Anniversary Celebrations, a celebratory year that has been truncated due to COVID-19 pandemic.

Dr. Kofi Ohene-Konadu, Chairman, UPSA Governing Council, said the financial clearance received from the Government by the Management of UPSA had been put to very good use; adding that with less strain on other resources, UPSA Management had been able to significantly increase internally generated funds, allowing for the development of major construction projects.

“More importantly, to meet the influx of students from the Government’s flagship Free Senior High School (SHS) program that are sure to choose UPSA, we began, in 2019, the construction of not one, but two, 10-storey student hostel to warmly welcome them to our campus.”

Prof. Kwesi Yankah, a Minister of State in-charge of Tertiary Education, lauded the UPSA for fast becoming a leader in innovative solutions; stating that it was not surprising that they had adequate infrastructure both physical and technical showcase today.