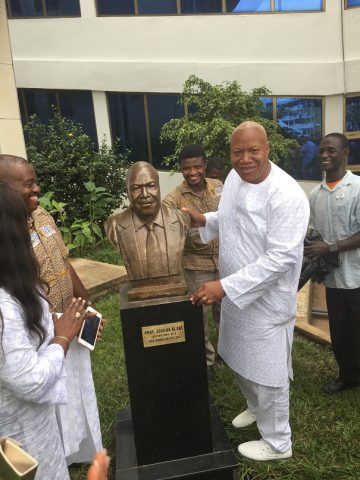 The University of Professional Studies, Accra has unveiled busts in memory of Professor Joshua Alabi and 4 others for their contributions to the development of the institution.

Prof. Alabi was the last Rector and the first Vice-Chancellor of the UPSA, under whose leadership the University experienced its phenomenal transformation from a small accountancy institute to one of Africa’s fastest growing higher education institutions.

The relatively small campus is now adorned with sprawling multi-storey buildings including a 5-floor lecture block complex with a seating capacity of 5,000 students, the Central Administration block complex, a 5-floor library complex, which is one of the biggest in West Africa; a new state-of-the-art medical Centre, a new academic block housing the offices of lecturers, a new 5-floor students’ hostel facility, and a new 5,000 seating capacity auditorium with underground car park, which is currently under construction. All these infrastructure projects were largely financed from the University’s own internally generated resources.

In honour of his vision and transformational leadership, the Governing Council of the University erected the bust of Prof. Alabi in front of the Central Administration Block while naming the University’s new library complex after him.

Prof. Alabi on his part expressed appreciation to the Governing Council and the current management of the University for the honour done him. He noted that it is a humbling experience to realise that his modest contributions towards making his alma mater better, was noticed and recognized by his predecessor. He thanked the staff of the UPSA for being part of the success story and encouraged them to continue in the same light to make UPSA the best university of choice in Africa for business education.

The other people whose contributions were also been recognized included the founder of the then Institute of Professional Studies (IPS), Nana J.K Opoku Ampomah; the Director of the IPS, Mrs. Theresa Andah; Mr. J.B. Buamah, Mr. E.A.K. Arkorful, and Rev. Fr. J.J.M. Martey, all past Directors of the IPS from 1980 to 2003. Rev. Fr. Martey was also the Rector of IPS from 2003 to 2008. The rest include Mr. W.B. Dapaah, First Registrar of IPS; Mr. Ewun-Toma, First Board Chairman of the UPSA Clinic; Mr. Idris Egala, first Chairman of Governing Council, Mr. Justice Nii Aryeetey, immediate past Chairman of Governing Council; and Dr. Seidu M. Mustapha, Current Registrar, UPSA who got the various buildings campus named after them.