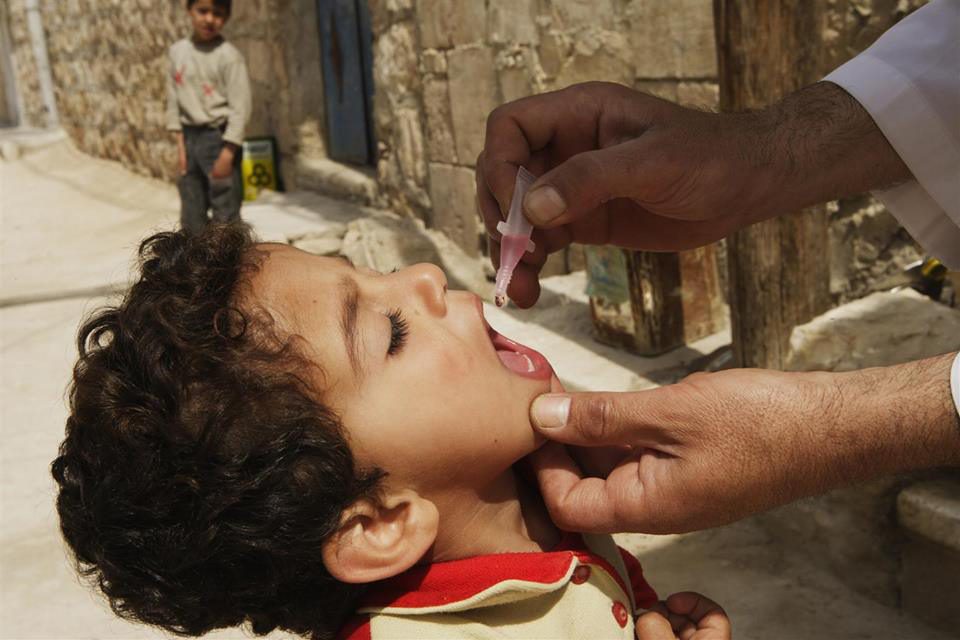 UNICEF has joined the World Health Organization (WHO) and partners to launch a huge immunization campaign against polio in Syria. Photo: UNICEF

Having just completed the first phase of the biggest polio vaccination campaign ever undertaken in the Middle East, the United Nations Children?s Fund (UNICEF) and the World Health Organization (WHO) today warned that unless children in hard-to-reach areas are also vaccinated, the number of those infected will continue to rise.

?Polio has forced its way back to Syria, adding to what was already a humanitarian disaster,? said Chris Maher, WHO Manager for Polio Eradication and Emergency Support.

He said in a news release that a recent polio outbreak in Syria has already paralyzed 36 children, most of them in contested and conflict-ridden regions. Another 765,000 Syrian children are currently living in hard-to-reach areas, making it incredibly challenging for health officials to reach them with the readily available and life-saving vaccine.

?We got to a point where we had to work with very limited resources to defeat what had been a long forgotten enemy in this region: one that does not know borders or checkpoints and can travel fast, infecting children not just in war-torn Syria but across the region,? Mr. Maher said.

No polio cases had been recorded in Syria since 1999. But the virus returned after 14 years due to severe damage to Syria?s health infrastructure. According to a report released today by WHO and UNICEF, polio vaccination coverage has dramatically declined from an average of 99 per cent to 52 per cent since the start of the conflict over three years ago.

Meanwhile, at least 60 per cent of Syria?s hospitals have been destroyed or damaged and less than a third of public ambulances still function. As it stands now, more than 6.5 million Syrian children depend on life-saving humanitarian assistance.

Despite these immense challenges and desperate conditions, the report also announced the completion of the first phase of a massive polio vaccination campaign. WHO and UNICEF reached 25 million children under the age of five in seven countries.

?This gives a glimpse of hope and is largely thanks to thousands of unsung heroes: committed health workers and volunteers who undertook such a formidable task all over the region and inside Syria, braving dangers to provide the polio vaccination to children,? said Maria Calivis, UNICEF?s Regional Director for the Middle East and North Africa.

?In the coming months, we have to reach more and more children, especially those who have not been reached because of the insecurity and violence,? Ms. Calivis stressed.

The report calls for immediate and unhindered access to hard-to-reach children under the age of five inside Syria. Also, health workers and medical vehicles inside Syria must be guaranteed safe passage. Raising awareness about polio among the population is also critical, says the report, noting that two national polio campaigns are planned for October and November in Syria.

The endemic, however, has spread beyond Syria. In March, Iraq?s Health Minister declared a polio outbreak when a case was detected in Baghdad and the following month, a second polio case with paralysis onset, was also reported in the capital.

Meanwhile, despite an ongoing intensive vaccination campaign, four new cases of polio have been confirmed in Somalia this year bringing the total number of those affected since the outbreak began in May 2013 to 198 ? most of them children.

WHO and UNICEF said this comes at the start of the latest vaccination campaign in Puntland, in north-east Somalia, where all of this year?s cases were discovered. The current round of vaccinations will target close to half a million children under the age of 10 years.

?Responding to the polio outbreak is one of the top priorities of the UN and the humanitarian community at large,? said the UN Resident and Humanitarian Coordinator for Somalia, Philippe Lazzarini. ?We need to continue supporting the Somali health authorities to achieve a polio-free Somalia.?

In May 2013, the first case of polio in six years was discovered in the country?s capital Mogadishu. At the time, it was estimated that over half a million children under five living in inaccessible areas had not been vaccinated.

The polio virus is transmitted through water or food contaminated with human waste from an infected person. While there is no cure for polio, the vaccine ? which is just two drops in the mouth ? is safe, effective and prevents paralysis. Children must be vaccinated several times to ensure they are protected for life.