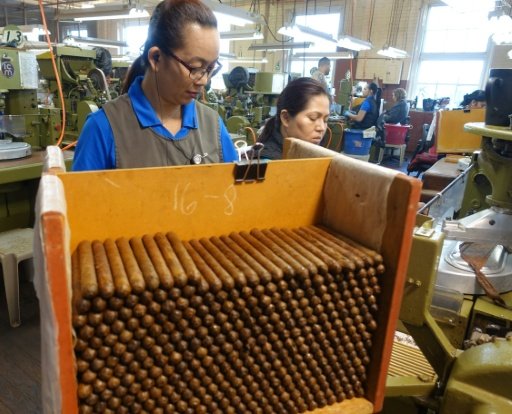 The 68-year-old Newman says new regulations on cigars expected any day now from the US Food and Drug Administration could snuff out his 130-year-old business, the J.C. Newman Cigar Company, by making it too costly and complicated to introduce new blends of cigars.
Health experts, however, welcome the government’s plan to regulate a range of tobacco products for the first time, from tiny flavored cigars that appeal to young smokers, to e-cigarettes, hookahs and full-sized cigars.

“These regulations are killing us,” says Newman, who has spent the last few years lobbying politicians for an exemption for his factory, the last making cigars in the Florida port city of Tampa, once known as the cigar capital of the world.

One floor below, the noisy din of vintage machinery fills the factory, as workers flatten tobacco leaves and feed a complex array of moving mechanical parts, resulting in piles of thick, neatly stacked cigars.

Newman’s grandfather, Julius Caeser Newman, an immigrant from Austria-Hungary, started the family cigar business in Cleveland in the late 1880s.

The company moved to the Tampa district of Ybor City in 1953. Today, the factory is a rare relic in that it still relies on the same machinery it has for years. Some of the equipment is up to 90 years old.

Tobacco is shipped in from Connecticut, Ecuador, Nicaragua and the Dominican Republic.

The factory strips and humidifies the leaves, blends tobacco for various cigars, rolls them, packages them in cellophane and ships them.

Newman says that of 13 billion large cigars sold in the United States every year, about 320 million are considered “premium cigars” like his.

“We are like a fly on the elephant,” says Newman.

“But we are a craft industry. It takes a lot of skill. We are an art form.”

Tampa has been known as the world’s fine cigar capital since 1886, though these days the crown might belong to Nicaragua or Honduras, according to Rodney Kite-Powell, curator of history at the Tampa Bay History Center.

“At its peak in the 1920s around 500 million cigars were produced in Tampa every single year, by hand,” he says.

“People coveted the Tampa cigar because of the quality.”

The industry suffered a series of blows — the Great Depression, two World Wars, and the Cuban embargo in 1961 which cut off the source of its tobacco leaves.

Over time, the 150 factories that dotted the streets of Tampa faded away, leaving only J.C. Newman.

“It certainly seems that if the FDA’s regulations come to pass that it will be one last blow to Tampa’s cigar industry,” says Kite-Powell.

“The financial impact of that might be just too great to overcome.”

Health experts say wider regulations are needed to avoid a new generation of youth becoming addicted to products like battery-powered vaping devices, and cigars containing flavors like chocolate and strawberry.

“There is a lot of marketing now of cigars to younger people, and we are very afraid that that is going to lead them to then start smoking heavily,” says Olveen Carrasquillo, chief of the division of general internal medicine at the University of Miami Miller School of Medicine.

Even though people do not typically inhale cigar smoke, he says they are known to be dangerous.

“A lot of people have misconceptions that cigars are somehow safer than cigarettes. They actually have the same cancer-causing chemicals,” Carrasquillo says.

“And many studies have shown that cigars are also strongly linked to many types of cancer.”

An FDA proposal, announced in April 2014, considered including an exemption from the stricter rules for the type of premium cigars J.C. Newman specializes in, but exactly how “premium” would be defined remains unclear.

“Rulemaking is a complicated process and this proposed rule resulted in more than 135,000 comments,” an FDA spokesman told AFP, declining to say when a final decision would be issued.

Once the rules are released, manufacturers would have two years to apply for marketing approval of their products.

“Cigar manufacturers have claimed that the sky is falling because of this regulation,” says Vince Willmore, spokesman for Campaign for Tobacco-Free Kids.

“We think that they greatly exaggerated the impact in their efforts to weaken or avoid regulation.”

Back at the factory, Newman expects that the FDA will require tests on any new product made after 2007, which could take up to 5,000 hours and cost one million dollars.

And even though his firm markets its products on the basis of tradition and quality, Newman says his business thrives by constantly coming out with new blends. Therefore, the rules could eventually force him out of business.

“We are not the problem,” Newman says.

“But we could very well become an unintended consequence.”