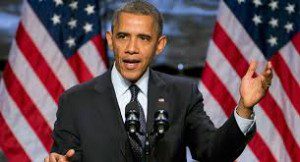 US President Barack Obama has asked Congress formally to authorise military force against the Islamic State of Iraq and Levant (ISIL) group, arguing that the fighters could pose a threat to the US homeland. A proposed draft resolution sent to Congress on Wednesday calls for conducting operations against ISIL with no geographic limitations for at least three years, with the suggestion ?that Congress revisit the issue at the beginning of the next president?s term?.

?This resolution strikes the necessary balance by giving us the flexibility we need for unforeseen circumstances,? the US president said, speaking at the White House. ?For example, if we had actionable intelligence about a gathering of ISIL leaders and our partners didn?t have the capacity to get them, I would be prepared to order our special forces to take action.?

Al Jazeera?s Alan Fisher, reporting from the White House, said that ?this is not going to change anything on the ground?, citing over 2,000 air strikes against ISIL since the US-led coalition began its offensive last August. ?What Obama is doing here is changing the legal framework of the operations? within US law, he added.

Obama, elected on a promise to end the US? wars, has asked legislators for war authorisation over the rise of ISIL, citing the large expanses of Iraqi and Syrian land the group has seized, and the American and allied hostages it killed after making online propaganda videos.

?It threatens American personnel and facilities located in the region and is responsible for the deaths of US citizens James Foley, Steven Sotloff, Abdul-Rahman Peter Kassig, and Kayla Mueller,? Obama said, listing the American hostages who died in ISIL custody.

?If left unchecked, ISIL will pose a threat beyond the Middle East, including to the United States homeland.?

Confirmation of the death of Mueller, a 26-year-old humanitarian worker, on the eve of Obama?s proposal added new urgency, while the wars in Iraq and Afghanistan were a caution to some legislators against yet another protracted military campaign.

Obama is asking Congress to authorise the campaign for three years, extending to the next president the powers and the debate over renewal for what he envisions as a long-range battle.

He is proposing no geographic limitations where US forces could pursue the fighters.

The authorisation covers ISIL and ?associated persons or forces,? defined as those fighting on behalf of or alongside ISIL ?or any closely related successor entity in hostilities against the United States or its coalition partners?.

Its ambiguity is designed to bridge the divide between legislators opposed to ground troops and those who say the commander-in-chief should maintain the option.

Obama said his draft would not authorise long-term, large-scale ground combat operations like those deployed in the past to Iraq and Afghanistan, arguing that those battles should be left to local forces instead of the US military.