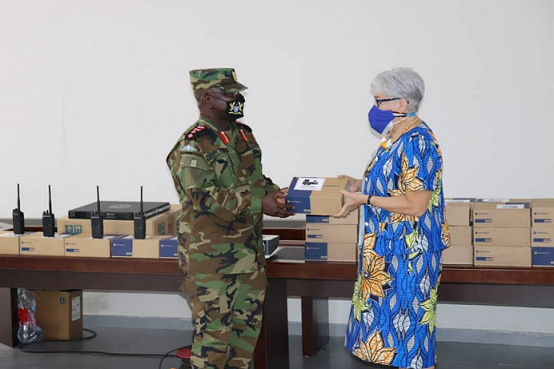 The United States Embassy in Ghana has supported the Ghana Armed Forces (GAF) to improve communication at the Bundase Training Camp (BTC) with a donation of state-of-the-art radio equipment.

This falls within the Army and the Embassy’s partnership on the Global Peace Initiative (GPOI) programme.

Madam Stephanie S. Sullivan, the U.S Ambassador to Ghana handed over 100 Very High Frequency (VHF) Handheld Motorola Phones and 10 Repeaters to Major General Thomas Oppong-Peprah, Chief of Army Staff (COAS) at a brief ceremony on Friday, at BTC near Prampram in the Ningo Prampram District of the Greater Accra Region.

The Ambassador revealed that the equipment, which was funded by the US Department of State and the GPOI programme at a cost of USD 300,000, included; installation and training of GAF personnel.

She said the equipment would provide a “critical asset” for the Ghana Armed Forces to use to enhance pre-deployment training ahead of United Nations Peacekeeping Missions.

“The new communication network also deepens the partnership between the United States and Ghana in supporting regional stability and peacekeeping endeavors,” the Ambassador stated.

She emphasised that the USA and Ghana maintained a longstanding partnership in security cooperation activities-a relationship that continued to grow from strength to strength.

Madam Sullivan also commended efforts of the GAF High Command at transforming the Camp over the decades, and also for the Army’s readiness and professionalism on the international peace and security theaters.

“Ghana’s Soldiers, Sailors and Airmen and Women play a critical role in regional stability and continue to raise the standard for professionalism in the conduct of peacekeeping missions,” she said, and added that her outfit was proud to team up with the GAF on other endeavours.

The US is also funding a water supply project to the camp and its surrounding communities.

Maj. Gen Oppong-Peprah who received the equipment on behalf of the Chief of Defense Staff, said the donation represented a significant investment in extending VHF communication coverage in BTC and served as a milestone in the GPOI programme.

He said the initiative would help expand VHF communication of BTC from the previous 12 km to a 35 km radius.
The COAS said it would improve the communication and monitoring of training in the Bundase Training Area, and expand the training modules.

He said the camp was undergoing various developments, and the “immense” contribution of the USA through the African Contingency Operations Training and Assistance (now GPOI) could not be over emphasized.

The COAS said the friendship between the U.S.A and Ghana had proven to be one that was growing stronger each passing year.
The BTC is one of the major training facilities of the GAF, training soldiers and operatives of other security agencies.

Prior to the handing over of the communication systems, the Embassy held a two-week installation and orientation training exercise for selected Officers and radio technicians from the 1 Signal Regiment at the Camp.
This was to build the capacity of the personnel to man and maintain the facility, and also train their colleagues in the unit.

Members of the Military High Command, Senior Officers of the GAF, and personnel attended the ceremony from the US Embassy and GPOI.