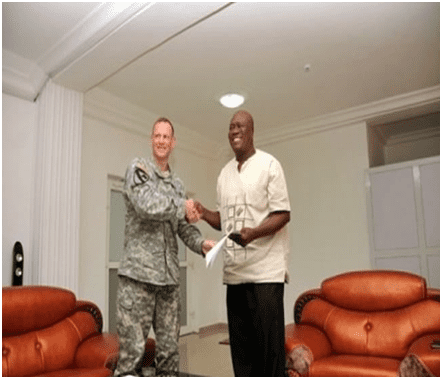 In line with government effort to move NADMO into digital operations, the United States Government has handed over a 300,000 dollar ultra-modern Web Emergency Operation Centre to funnel the National Disaster Management Organisation (NADMO) in Accra. The Centre, which was initiated way back in 2011, with support from North Dakota National Guard, aimed at improving the coordination of emergencies in the country.
It has web emergency lines to help NADMO officials receive first-hand information live in case of any disaster outbreak countrywide.

In his remarks, Mr. Kofi Portuphy, National Co-ordinator of NADMO, said the Centre marked an important milestone in Ghana?s disaster preparedness programmes as the facility would complement the country?s effort to prepare national disaster plan to give quick relief and response to the people.
He hinted that NADMO and North Dakota States? partnership had travelled over 10 years and had benefitted from numerous capacity training workshops for NADMO staff and its partners in their pursuit to have best practices of disaster risks management and response.

NADMO boss said for the past four to five years, US National Guards had taken them through intensive capacity building and how to use the infrastructure and give quick response to distress communities.
?As I speak today its marks a point that everyone desires to attain to have excellent performance in the area of disaster risks management and response and I am very grateful to all our partners for their support in equipping the centre,? he said.

Mr Portuphy emphatically that the facility would be officially commissioned in March, 2015, after NADMO had finished its test running for about 90 days and was sure that they could relay to all affiliate satellite stations in the districts and regional capitals.

For his part to handover the facility to NADMO, the International Bilateral Affairs Officer, United States Embassy, MAJ McAvries, said the facility was the first awareness creation centre in Africa.
?Also, we were fascinated by the level of professionalism of NADMO and its partners and we equally recognised that Ghana has a unified response to disasters,” he added.
He said Ghana was nominated for the project because of her long relationship with the North Dakota State, which happened to have similar flood prone areas like Ghana.