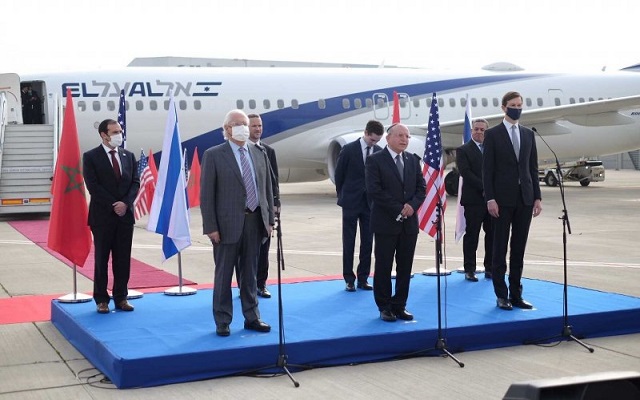 A US-Israeli delegation flight to Morocco took off on Tuesday, less than two weeks after Morocco joined a growing list of Arab countries to begin normalizing relations with Israel.

The two are set to meet with Morocco’s King Mohammed VI as part of efforts to advance the normalization talks.

“We have several agreements we are looking to conclude on the trip and hopefully it will pave the way toward a very warm peace,” Kushner said at a press conference on the tarmac before the flight took off from Ben Gurion Airport.
“History is being written before our eyes,” Ben-Shabbat said.

The US embassy in Jerusalem said it was the first direct flight by Israeli airline El-Al to Morocco.

Israel also recently inked US-brokered deals with the United Arab Emirates (UAE), Bahrain and Sudan – the first recognition of the Jewish state by Arab nations in a quarter of a century.

Most Arab countries have vowed to never recognize Israel until a peace deal is struck with the Palestinians. However, the recent normalization agreements have shifted dynamics in the region.

At the same time as the Israel-Morocco deal was announced, Trump said the United States would recognized Moroccan sovereignty over North Africa’s disputed Western Sahara territory, reversing decades of US policy.

Morocco took over Western Sahara in 1975 after Spain withdrew from the region and claims the phosphate-rich area as part of its territory. The Algeria-backed Polisario Front movement seeks the region’s independence.