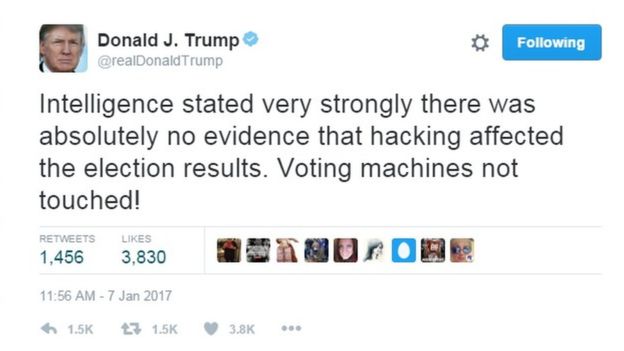 Donald Trump says Democrats have shown “gross negligence” by allowing their servers to be hacked in the run-up to the 8 November presidential election.

The US president-elect made the comments after a US intelligence report said Russian President Vladimir Putin had “sought to help Donald Trump win”.

Mr Trump has stopped short of accusing Russia of interfering, saying only that the election outcome was not affected.

Moscow has not commented, but Russia has previously denied the claims.

Following the report’s findings, the US Department of Homeland Security announced that voting machines and other election databases would be classified as “critical infrastructure” and given more protection from cyber-attacks.

Emphasising that the election outcome was not affected, Mr Trump added on Saturday: “Only reason the hacking of the poorly defended DNC is discussed is that the loss by the Dems was so big that they are totally embarrassed!”

Hacking into the email accounts of the Democratic National Committee and top Democrats;Using intermediaries such as WikiLeaks, DCLeaks.com and Guccifer 2.0 persona to release the information acquired from the hackings;Using state-funded propaganda and paying social media users or “trolls” to make nasty comments

In an interview with ABC, President Barack Obama said that he was concerned that there had been “Republicans or pundits or cable commentators who seem to have more confidence in Vladimir Putin than fellow Americans because those fellow Americans are Democrats.

Asked whether Mr Trump was among them, Mr Obama said:

“We have to remind ourselves we’re on the same team. Vladimir Putin’s not on our team.”

The unclassified report says that the Kremlin developed a “clear preference” for Mr Trump.

Russia’s goals, the document added, were to “undermine public faith” in the US democratic process and “denigrate” his Democrat opponent Hillary Clinton, harming her electability and potential presidency.

“We assess Russian President Vladimir Putin ordered an influence campaign in 2016 aimed at the US presidential election,” it said.

It gives no detailed evidence of Mr Putin’s alleged role.

The report says Mr Putin liked Mr Trump because he had vowed to work with Russia and the Russian leader had had “many positive experiences working with Western political leaders whose business interests made them more disposed to deal with Russia, such as former Italian Prime Minister Silvio Berlusconi and former German Chancellor Gerhard Schroeder”.

In contrast, Mr Putin had blamed Mrs Clinton for inciting anti-government protests in 2011 and early 2012 “and because he holds a grudge for comments he almost certainly saw as disparaging him”.

Mr Trump has repeatedly questioned US intelligence claims of Russian hacking. In a statement after being briefed on the report on Friday, the president-elect declined to single out Russia, but said he had “tremendous respect for the work and service done” by those in the US intelligence community.

Last week President Obama ordered the expulsion of 35 Russian diplomats from the US over the alleged hacking. Russia has said it will not reciprocate.