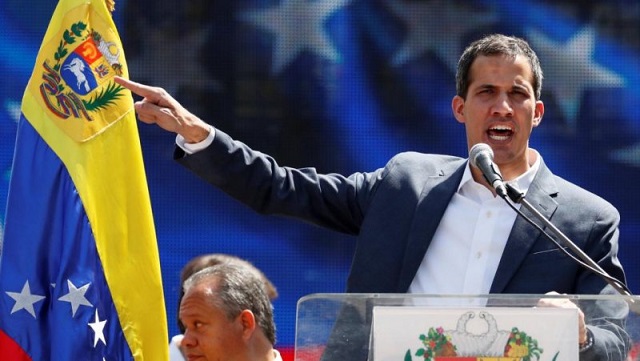 The United States on Wednesday reaffirmed its support for Venezuelan opposition leader Juan Guaido ahead of Sunday’s parliamentary elections, in which he is expected to lose control of the country’s only opposition-dominated government branch.

The US government and Venezuela’s “interim government,” headed by Guaido, said they “recognize the degradation of rule of law in Venezuela due to the illegitimate Maduro regime’s lack of will to stop drug trafficking and root out the criminal elements that exploit every corner of Venezuela.”

About 30 opposition parties have announced a boycott of the elections which they see as a fraudulent attempt to place the National Assembly in the hands of President Nicolas Maduro’s Socialist Party.

The boycott is led by Guaido, who launched a power struggle against Maduro soon after being elected parliament speaker in January 2019, and whom dozens of countries recognized as Venezuela’s interim president.

Maduro, who won a second term in 2018 elections widely criticized as undemocratic, has presided over an economic meltdown and political unrest that have driven about 5 million Venezuelans to flee abroad.

Washington has offered a reward for information leading to the arrest or prosecution of Maduro, whose government it accuses of drug trafficking and other crimes.

The US, the European Union and the Organization of American States have criticized the parliamentary elections as lacking democratic guarantees.

But many analysts also see Guaido as having been weakened after nearly two years of failed attempts to dislodge the military-backed president.

In the statement indirectly reaffirming the alliance between the Guaido-led opposition and the US, the two called Maduro “the illegitimate Venezuelan dictator and drug kingpin” who “represents a danger for the stability of the whole region.”