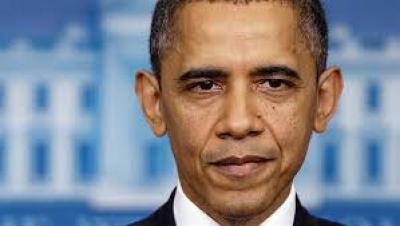 U.S. President Barack Obama said Saturday at the 7th Summit of the Americas that the United States is moving to deepen engagement with its Latin American neighbors. He attributed the recent “historical” changes between the United States and Cuba to the new approach, saying that while there were significant differences between the two countries, he believed “the pursuit of mutual interest will help to make the progress.”
Following simultaneous announcement by Obama and his Cuban counterpart, Raul Castro, on Dec. 17 last year, the two countries have so far conducted three rounds of talks to restore diplomatic relations.
The U.S. State Department has completed the review of Cuba’s status and recommended that the White House remove Cuba from the “State Sponsors of Terrorism” list, where the Caribbean island has stayed since 1982.
U.S. Secretary of State John Kerry and Cuban Foreign Minister Bruno Rodriguez held a closed-door meeting Thursday night, the highest-level meeting between the two sides since 1961 before the Obama-Castro talks that followed.
On Saturday, Obama and Castro held “substantive” talks, the first between the two countries’ heads of state since 1956.
Besides headline-capturing developments in U.S.-Cuba relations, the United States has also moved recently to win favor of several other Latin American countries.
On March 1, U.S. Vice President Joe Biden visited Guatemala, met with presidents of El Salvador, Guatemala, Honduras. After the visit Biden asked Congress for some 1 billion U.S. dollars to help Central American countries address security and economic challenges.
On Wednesday, Obama flew to Jamaica, marking the second visit by a sitting U.S. president to the country, after a visit by Ronald Reagan in 1982.
On Thursday, a day before the opening of the 7th Summit of the Americans, Obama met with 15 heads of governments in the Caribbean Community and proposed a 20-million-U.S.-dollar fund to support clean energy projects in the region.
Earlier, Obama announced a visit to the United States in this June by Brazilian President Dilma Rousseff, who had canceled a scheduled trip in 2013 due to the revelation that U.S. spies had tapped her phone.
Some analysts said Obama, with only a year left for his second term in office, aims at leaving a political legacy for being the ice-breaker on U.S.-Cuba relations, and others believe the new rapprochement toward Cuba has more pragmatic purposes.
Political isolation and trade embargo enforced by the United States have caused great damage in the Caribbean island and for its people, but keeping such policies in place also costs the United States no small amount both economically and politically.
As for the rest of the hemisphere, which suffer constant interference from the United States in the past two centuries, their dissatisfactions toward the United States have also grown.
Analysts say it does not matter if the United States chooses to “engage” or “meddle” with regard to Latin American countries. The ultimate purpose is to secure its influence in the “backyard”. Enditem