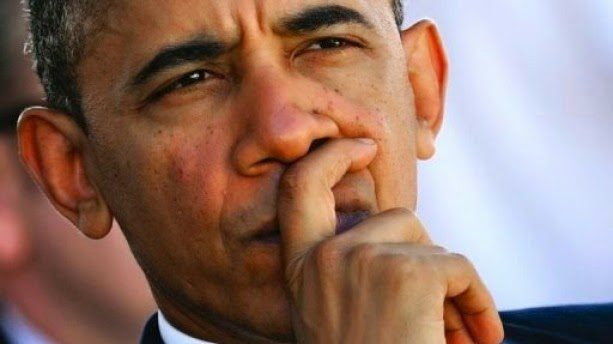 Barack Obama announced an open-ended bombing campaign against Islamic State militants on Wednesday that will extend into Syria for the first time, despite acknowledging that the extremist group did not currently pose a direct threat to the US homeland.

In a markedly interventionist speech on the eve of the 13th anniversary of the 9/11 attacks, Obama announced an aggressive offensive to combat Isis, which has been responsible for the beheading of two American citizens in the past month and captured a swath of territory in northern parts of Iraq and Syria.

He compared the campaign to those waged against al-Qaida in Yemen and Somalia, where US drones, cruise missiles and special-operations raids have battered local affiliates, yet without notably improving the stability of either country nor dealing decisive blows to Islamic militants there.

Obama said the air strikes were a necessary counter-terrorism measure to prevent the group, also known as Isil, from becoming a future threat to the US and therefore did not require fresh congressional approval.

But he is expected to receive overwhelming congressional support for separate authorisation to provide military support to rival Syrian rebels, a vote that some Republicans fear could help boost Democratic chances in this November?s midterm elections by providing political support for his tough new foreign policy.

?We will conduct a systematic campaign of airstrikes against these terrorists,? said Obama. ?I will not hesitate to take action against Isil in Syria, as well as Iraq,? he added.

The speech came a year to the day of another TV address, when Obama declared his intention not to launch air strikes against the Syrian regime of Bashar al-Assad. Then, Obama said: ?I?ve spent four-and-a-half years working to end wars, not to start them.?

A year on, Obama?s hand has been forced by the remarkable advance of Isis in Iraq and Syria. A more limited campaign of air strikes against Isis targets in Iraq has been portrayed as an attempt to defend US interests there. But the credibility of that definition has been stretched: the US military has so far launched 154 air strikes in Iraq and deployed more than 1,100 troops and ?advisers? in ostensibly noncombat roles.

The Pentagon is currently working on identifying suitable targets in Syria, according to White House officials speaking to reporters in advance of the speech. The US will also deploy a further 475 troops to Iraq, where they are expected to help identify further targets for air strikes.

Obama struck an unusually nationalist tone in his speech, referring to American leadership as ?the one constant in an uncertain world?. He said: ?America, our endless blessings bestow an enduring burden. But as Americans, we welcome our responsibility to lead.?

The president acknowledged the portent of the date. ?Tomorrow marks 13 years since our country was attacked. Next week marks six years since our economy suffered its worst setback since the Great Depression. Yet despite these shocks; through the pain we have felt and the gruelling work required to bounce back ? America is better positioned today to seize the future than any other nation on Earth.?

Strikes against Syria are expected to take some time to identify and Obama warned of a protracted campaign. ?This counter-terrorism campaign will be waged through a steady, relentless effort to take out Isil wherever they exist, using our air power and our support for partner forces on the ground,? he said.

But he echoed a number of recent US intelligence assessments that suggest there is not current threat to the US. ?If left unchecked, these terrorists could pose a growing threat beyond that region ? including to the United States,? said the president. ?While we have not yet detected specific plotting against our homeland, Isil leaders have threatened America and our allies.?

A key part of the plan is the enlistment of robust support from regional allies. ?This is a moment for international cooperation to prove its value,? Obama?s secretary of state, John Kerry, said during a meeting with the incoming Iraqi prime minister Haider al-Abadi in Baghdad on Wednesday. ?This is a moment for multilateralism to prove its value and have its effect.?

At the Nato summit in Wales last week, Obama indicated that securing the backing of countries such as Saudi Arabia, Jordan and Turkey would be key to any broad front to the insurgents. On Wednesday, the president spoke by phone with King Abdullah of Saudi Arabia. Separately, France indicated that it would join the US in airstrikes against Isis fighters in Iraq if called on to do so. But its foreign minister, Laurent Fabius, warned that extending the attacks westward into Syria could be seen as supporting President Bashar al-Assad.

Earlier in the day, Jeh Johnson, the homeland security secretary, stressed that the administration did not believe Isis posed a direct threat to the United States at home. ?At present, we have no credible information that [Isis] is planning to attack the homeland of the United States,? Johnson told a Council on Foreign Relations audience in New York.

The discrepancy between Isis?s assessed threat to the US and the buildup of US military action has sparked accusations of fearmongering.

Despite the assessed lack of an imminent threat, Johnson portrayed Obama?s latest anti-Isis strategy as a responsible approach against the ?serious threat? posed by a ?depraved? adversary.

?After 13 years of war since 9/11, the decision by the president to take on a new fight against this enemy was not an easy one,? said Johnson, who signaled that one of his main tasks in the coming months will be preventing Isis fighters from entering the United States.

Johnson said he had arranged new deals with foreign airports for enhanced passenger screening, which he called an ?imperative? that he seeks to expand. Additional intelligence sharing between the department, the FBI and intelligence agencies in the US and Europe will attempt to identify people attempting to enter the US from Syria. Identifying ?terrorist travel patterns? will be a priority, he said, with more nations enlisted for the effort.