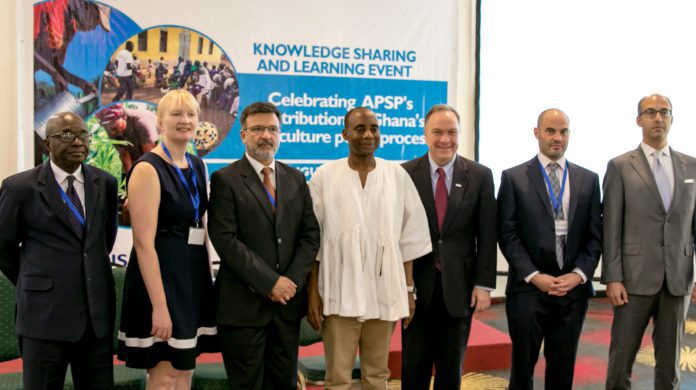 The United States of America is partnering the Republic of Ghana to promote growth in the agricultural sector in support of its vision of “Ghana beyond Aid.”

According to a press release from the public affairs division of the Embassy of the United States of America in Ghana and copied to Newsghana.com.gh, it indicated that,
through the U.S. Agency for International Development’s (USAID) Feed the Future Initiative, the U.S. hosted a knowledge sharing and lessons learned forum on August 15, 2018 at the Swiss Spirit Alisa Suites & Hotel in Accra.

According to the release, Deputy Minister of Food and Agriculture responsible for Annual Crops, Honorable Dr. Sagre Bambangi, and Acting USAID/Ghana Mission Director, Steven E. Hendrix, opened the event lauding the cooperation between both nations.

“Mr. Hendrix shared that, Ghana’s commitment to move the nation beyond aid is shared by the United States. He said, “We believe that two mutually-reinforcing factors determine a country’s self-reliance. The first is commitment. This is the degree to which a country’s laws, policies, actions, and informal governance mechanisms — such as cultures and norms — support progress towards self-reliance. Second, capacity: how far a country has come in its journey across the dimensions of political, social, and economic development, including the ability to work across these sectors.”

“As Ghana increases its commitment and capacity to plan, finance, and manage its own development, its level of self-reliance should also increase. Country leadership is essential to achieving Feed the Future’s objectives and a core principle of Sustainable Development Goals.

“Under the U.S Government’s new Global Food Security Strategy, USAID will continue efforts to strengthen country leadership and commitment to food security and looks forward to a continued strong partnership with the Government of Ghana, private sector, academia, and civil society to reduce poverty, hunger, and malnutrition through agriculture-led growth, resilience, and nutrition,” the release noted.

Feed the Future is the U. S. Government’s global hunger and food security initiative. With a focus on smallholder farmers, particularly women, Feed the Future supports partner countries in developing their agriculture sectors to spur economic growth and trade that increase incomes and reduce hunger, poverty, and undernutrition. For more information, visit www.feedthefuture.gov.