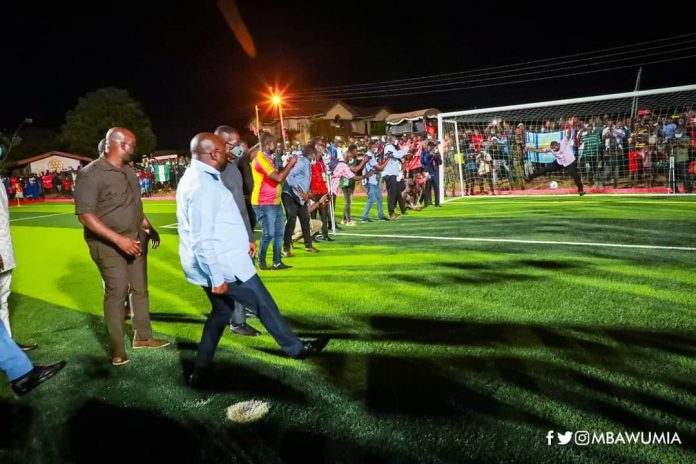 The construction of the edifice is in connection with the president’s aim of improving sports infrastructure across all constituencies.

Speaking at the commisioning, the Vice president, His. Excellency Dr. Mahamudu Bawumia, reiterated that the construction of sports facilities across the regions is in fulfillment of promises by the Akufo Addo led government.

“The commisioning of this edifice adds to the remarkable number of modern AstroTurfs that the government of president Nana Addo Dankwa Akufo Addo has built in various communities across the country in the past four years, in fullfilment of the promise to bring modern sports infrastructure to the community, District, Regional and National level.

“At the National level, the government has in the past four years invested heavily in the rehabilitation of our national stadia, the Accra Sports Stadium, the Baba Yara sports stadium in Kumasi, which will soon be completed, Aliu Mahama stadium in Tamale and the ongoing works at the Essipong stadium in Sekondi.

“At the Regional level, the Akufo Addo government is building Ten (10) multipurpose stadia in all the ten regions in the country and they will soon be commissioned when the final stage of works are completed.

The Vice President disclosed that the government has also outlined plans to construct other six stadia in the newly created regions.

“Additionally, government has initiated moves to build six more in the 6 newly created regions to ensure each region has at least one ultramodern and multipurpose sports stadium for high level sports activities, he said.

He added that the construction of these edifices will enhance the improvement of sports and talents in the various communities.

“These community pitches would also serve as a platform to unearth more talents to our national leagues and national teams due to greater participation in sports activities. Our talented youths are already highly interested in football and other sporting disciplines and the improvement of infrastructure has rekindle their interest and enthusiast,” the Vice president, added.

Dr. Mahamudu Bawumia admonished Ghana Gas and CEO of Wembley Sports Construction, Mr. Robert Coleman, for the excellent works in the construction of standard pitches across the country.

“Let me commend all those who have worked tirelessly to ensure the realization of this project, especially, Ghana Gas company limited who funded this project for the Adjiriganor community in the Adenta Constituency. Ghana Gas has funded similar projects in Sekondi, Kpeng and Asanti Agogo. They are also constructing hockey pitches at the University of Ghana, University of Cape Coast and the KNUST.

“I would like to thank Wembley Sports Construction limited, led by their CEO Mr. Robert Coleman for the good work done in ensuring they construct wonderful pitches across the country. Their works are excellent,” the vice president, Dr. Mahamudu Bawumia he stated.

The sports Minister, Hon. Mustapha Yussif, in his remarks called on cooperate entities to support the good course.

“I would like to appeal to Ghana Gas and other cooperate companies to do more for our communities. The ministry of youth and sports will continue to collaborate with government and private agencies to expand the infrastructure across the various communities”, he said.

On his part, Dr. Ben K.D Asante, CEO of Ghana Gas, believed sports has a vital cardinal place in nation building and comprise of 3 significant pillars.

“In terms of discipline it provides, the competitive spirit it engenders in us, the lessons it teaches both in victory and defeat, he said.

“Personal development, which comprise of coaching and other officials, equipment provision and of course facility development including plain surfaces like these,” he added.

The event saw a curtain raiser match between some former Black Stars players take on a selected side from Adjiriganor.

The Greater Accra Regional minister, Hon. Henry Quartey, the GFA president, Mr. Edwin Kurt Okraku, The MCE for the Adenta Municipal Assembly, Nii-NOI Adumuah and former MP for the Adenta Constituency, Mr. Yaw Boabeng Asamoah were all in attendance to grace the occasion.

The facility which is being constructed by the Wembley Sports Construction limited has standard pitch, an 11-aside full pitch of 98 by 58 square meters and floodlights, changing rooms, wash rooms and stands.