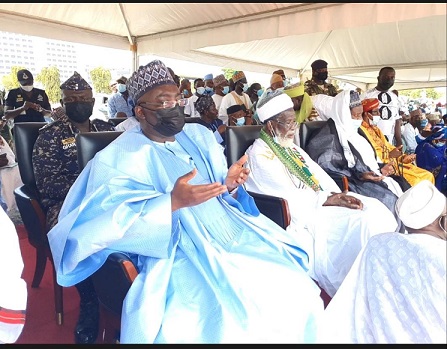 The revered Sheikh passed away in April, this year and his 40th-day funeral was held on Sunday, June 6, at the forecourt of the State House in Accra.

At the funeral attended by the National Chief Imam, Sheikh Dr Osman Nuhu Sharubutu, and dignitaries from neighbouring West African countries, Vice President Bawumia eulogised Sheikh Shaban for his service to humanity and the country.

“It is only after the death of a man that you realise how much he was held in regard. Judging from the gathering that we have today, not only in the numbers but how far people have come; from Nigeria, Burkina Faso, Togo, Benin, Senegal, etc so that we can pay our respect to our spiritual man of God, Sheikh Salisu Shaban,” Dr Bawumia said in his tribute.

“He was also a champion of healthcare by organising free health screening for people,” he added.

Dr Bawumia noted that the late Sheikh Shaban was a man who did so much for the country, hence the decision by President Akufo-Addo to honour his memory by allowing his funeral to be held at the forecourt of the State House.

“He was a man who did so much for our country and our community so the President decided that, considering what he had done for the country, his 40th day Adua should be held at the forecourt of the State House. I thank the President for this.”

Dr Bawumia also recalled with nostalgia, his relationship with the departed Cleric.

The Vice President said he visited Sheikh Shaban shortly before he fell ill, and also reached out to him during his stay at the hospital and when he was discharged.

Dr Bawumia urged the Muslim Community and Ghanaians, in general, to continue to honour Sheikh Salisu Shaban by emulating his peaceful and humanitarian traits.