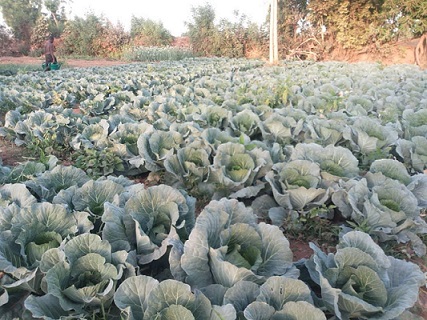 Some vegetable farmers in the Lambussie District of the Upper West Region have appealed to government and other development partners to support them with subsidized farm inputs to sustain their businesses.

They said the impact of COVID-19 affected their living condition, saying, government through its Planting for Food and Jobs (P4FJ) programme should support them with subsidized inputs including; watering cans, fertilizer, pesticides among others.

The vegetable farmers who produce, cabbage, green pepper, lettuce, pumpkin leaves among others made the appeal in separate interviews with the Ghana News Agency during a visit to their farms in Lambussie.

Mr Paase Kwasi, a vegetable farmer in the area said he had been in vegetable farming for about 15 years, but the impact of COVID-19 and the high cost of purchasing fertilizer and vegetable seedlings such as the “Bawku Red Onion” seedlings had affected his scale of vegetable production this season.

“Now that the raining season is over, it has become difficult to buy farm inputs, such as fertilizer and others at subsidized prices and because we don’t have a market here, transportation cost is also high, we travel to other districts and as far as to Bawku to buy onion seedlings ” he said.

“I used to farm about six acres of different vegetables, but I have reduced my farm size to 2 and half acres and I’m not even sure I can gain the money I invested in this farm because of the high cost in transportation and accessing the farm inputs” he added.

Mr Kwame Nawah, also a vegetable farmer, expressed the same concern, saying “vegetable farming in this area was a lucrative business, but due to difficulty in accessing farm inputs in the area, it had affected my finances, making it difficult to take care of my family because we depend on it to survive”.

“The ground has good water table and if given access to these farm inputs at subsidized prices like watering cans, fertilizer and pesticides, we would be able to do even all year round farming” he said.

He said, “We have a lot of people in Lambussie including; the youth engaged in vegetable farming and many people from nearby towns like Nandom, Lawra, Fielmon, among others, who patronize our farm produce in large quantities and if supported by government and other benevolent organizations we have the potential of producing in larger scale”.