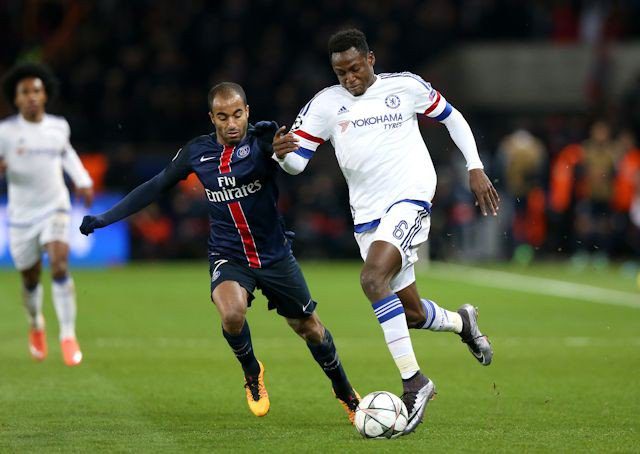 After a very long wait, the much awaited knockout stage of the Champions League kicked off. A struggling Chelsea had a daunting task of taking on an in-from PSG at the Parc des Princes. PSG dominated the early part of the affair as Ibrahimovic scored a freekick courtesy a deflection of John Obi Mikel. Mikel equalised with the last kick of the half after a corner from Willian somehow fell onto the Nigerian’s foot. PSG took charge of the second half and were rewarded with less than ten minutes to go as Cavani volleyed PSG into the lead after a beautifully floated pass by Di Maria. From a Chelsea perspective, there were sparks of brilliance but their fans will feel that their chances were rather few and far between.

As expected, Di Maria started on the right side of a three man PSG attack which meant that he would come up against Baba Rahman. Yesterday’s match was Rahman’s second start in the Champions League. With that in mind, Rahman was tipped as the bookmaker’s underdog against a more experienced figure in Di Maria. Di Maria certainly didn’t have it easy against the Ghanaian as he was limited to just passing the ball anytime he was confronted by Baba. Baba seemed to have excelled in performing his duties for the night as he kept an illustrious Di Maria out for the first half. Di Maria’s frustration became obvious as he started drifting inwards to affect the play. That was the first reminder that Baba Rahman was winning this mini duel. Baba Rahman prevented Di Maria from cutting in onto his favourite left and that forced the PSG player to suffice for just reverse passes into the path of Marquinhos. Rahman also had to mark Marquinhos as Hazard didn’t really track back on the night – a job Rahman also did brilliantly, not allowing any crosses from the Brazilian full back.

After the break, Laurent Blanc tweaked his tactics and pushed Di Maria on to the left wing, as a result of that, Baba now had to face a pacey Lucas Moura. Once again Baba managed to keep the Brazillian quiet and in the processed for the latter to cut inside rather than go wide. Lucas was unable to get past Chelsea’s left back even with his blistering pace. Baba Rahman made key interceptions during the game, his most noticeable is when he cut out a one two pass which would have seen Lucas go through on goal. After his interception, he drew a foul from Moura to slow down the game as Chelsea were drowning in the immense pressure from the Parisians.

On the average, this could go down as Baba Rahman’s best performance because the stats say so. The former Kotoko player almost had assist to his name in the first half when Kevin Trapp saved a header from Diego Costa – the cross to Costa was by Baba Rahman. He also managed to brilliantly get past Ibrahimovic with a brilliant skill move when the latter was trying to kill time in the dying minutes. After giving Lucas a torrid time in attack, he got the Brazilian booked in the second half after he pulled Rahman back (Rahman had a clear path ahead of him and was on his way to the opponent’s penalty area). In the first half, Baba had 83% pass accuracy, 3 crosses, 3 clearances, won 1 tackle and 1 aerial duel, and of course, created a chance for Diego Costa.

Baba Rahman’s confident performance has earned him admirations all over in the world. If he is to continue in this vein he will forever stay in the memory of Chelsea fans. Although Chelsea narrowly lost yesterday, Baba Rahman’s impressive display saw him being likened to the great Ashley Cole. I think this blameless performance should be a stepping stone for the Dreams Academy graduate to fully reach his potential as he has many years ahead of him.