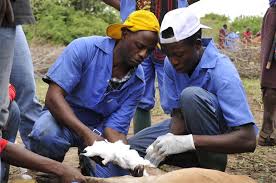 Dr Nurah Gyiele, a Minister of State in charge of Livestock, on Tuesday said the Ministry is expecting a financial clearance from the Ministry of Finance to employ about 40 veterinary doctors and 600 veterinary technical officers.

“Since coming into office I have had scheduled and unscheduled meetings with leadership of the Ghana Veterinary Medical Association (GVMA), Veterinary Council of Ghana (VCG) and the Veterinary Services Department (VSD) on this matter. We have analysed the staff strength and staff available for employment and put in a strong request for veterinary doctors and technicians to be employed”, he stated.

He said recruitment was meant to augment depleting and dwindling staff strength, which remained one of the major challenges confronting the profession due to its numerous ageing and retiring officers.

“A lot of veterinary surgeons and technicians are ageing and retiring or passing on without replacement”, he added.

Dr Nurah Gyiele said this at the opening ceremony of the 43rd Annual General Meeting of the Ghana Veterinary Medical Association (GVMA) in Dormaa Ahenkro.

It is being celebrated with the theme: “Antimicrobia Resistance in Livestock and Poultry, Its Economic and Public Health Implications”.

Dr Gyiele noted that the free market economy practised has given rise to almost everyone in the livestock and poultry industry becoming a veterinary doctor.

“They prescribe their own drugs and administer antimicrobial without consulting the competent veterinary professionals. Veterinary pharmaceutical shops are everywhere. This cannot be tolerated any longer”, he added.

He expressed the commitment of the government and the Ministry to support in the management of antimicrobial through four action areas namely; awareness creation, evidence, governance and practice.

Dr Gyiele indicated that with the implementation of planting for food and jobs, the animal subsector will not be overlooked.

“The poultry and pig subsector stands to benefit from the bumper harvest that is envisaged”, he said.

He advised livestock and poultry farmers to immediately stop or reduce the misuse of antimicrobial on their farms unless prescribed by a competent veterinary professional.

“Economically, antimicrobial resistance increases the cost of production, affects health and productivity. Antimicrobial resistance can lead to the collapse of farms and investment, this will affect the lifestyle of laid off workers and their families and disrupt the social cohesion of the people in the catchment area”, he added.

Mr Sigfried Kwame Addo, the Dormaa Municipal Coordinating Director who spoke on behalf of Mr Iddrissa Ouattara, the Dormaa Central Municipal Chief Executive, appealed to them to take stock of their past achievement and failures and how to mitigate them to chart a new course forward that promote the health of animals and humans.

He commended them in their efforts in helping to combat and control certain livestock diseases like bird flu and swine and asked them to focus on research to confront rapid challenges in the profession.

The MCE implored them to collaborate with partners in public health to improve the human health outcomes in the Municipality and in the country as a whole.

He called on the Association to support government’s aim to revamp the livestock sector through the Livestock Development Project to improve the diet of Ghanaians and generate the much needed employment.

He stated that the Association advocates that antimicrobial be used only and according to veterinary prescriptions and examinations in compliance with the laws of the country to protect both animal and public health.

Dr Danso added that the veterinary pharmaceutical regulations is now in parliament waiting the tabling of a motion for it to be debated and passed into law.

He said the meat inspection regulation document had also been completed and awaiting discussion from stakeholders consultative forum after which it would be presented to Attorney General’s office then later to Cabinet and finally to Parliament for its assent to become law.

Antimicrobial resistance is a global public health concern for both human and animals. It occurs when microorganisms such as bacteria, viruses, fungi, and parasites change in ways that renders the medications used to cure the infections they cause ineffective.

When the microorganisms become resistant to most antimicrobial they are often referred as ‘superbugs’.
GNA/Newsghana.com