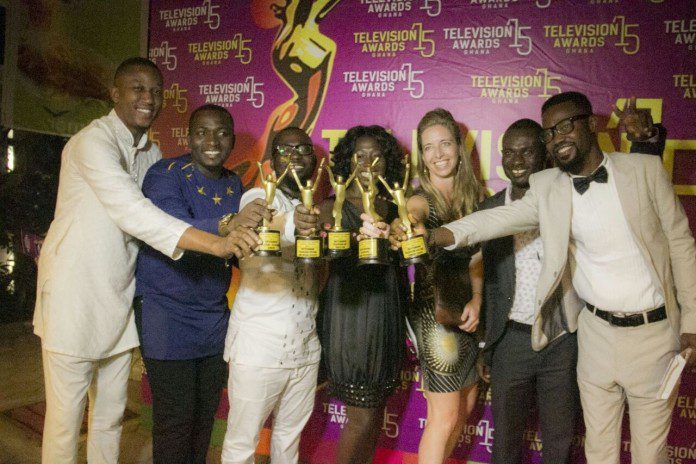 Viasat1 Television, your number 1 entertainment channel in Ghana, has won five out of 11 award categories at the 2015 Television Awards Ghana (Industry Awards). The event was held at the Best Western Premier Hotel in Accra and was a prelude to the main event which comes off this Friday, 14th August 2015.

Management of the channel, in appreciation of viewers? immense support over the years, said they are committed to providing quality entertainment programmes to all Ghanaians. CEO of Viasat1, Laetitia Royaards, expressed her appreciation to the production team for the hard work that earned the channel those awards. In a later interview on ?This Morning?, she urged corporate bodies to tap into the success of Viasat1 and roll out their business campaigns on the channel. According to her, Viasat1 has chalked many successes since it began transmission in December 2008, and the future can only be brighter.

Viasat1?s Head of Own Production Brenda Antwi-Donkor and Programmes Manager, Anthony Mintah Junior, were also excited and expressed their optimism for the future.

The event which started with a dinner reception witnessed various players in the Ghanaian television and entertainment industry.

Honourary awards were presented to personalities who have contributed immensely to the growth of television in terms of quality contents and programming.

Meanwhile, Viasat1 is rallying for votes ahead of the prime time event which comes off on Friday.

To vote ?This Morning? for Outstanding Television Morning Show, text TAG A2 to 1406

To vote for ?The One Show? for Most Popular TV Entertainment Show of the Year, text TAG F2 to 1406

Since its launch in December 2008, Viasat1 has maintained its tag, ?Your Number Entertainer? and has proved to be one of the best television stations in the country.

FIDA-Ghana calls for the modification of widowhood rites

HIV killed over 900 from January to June – NACP