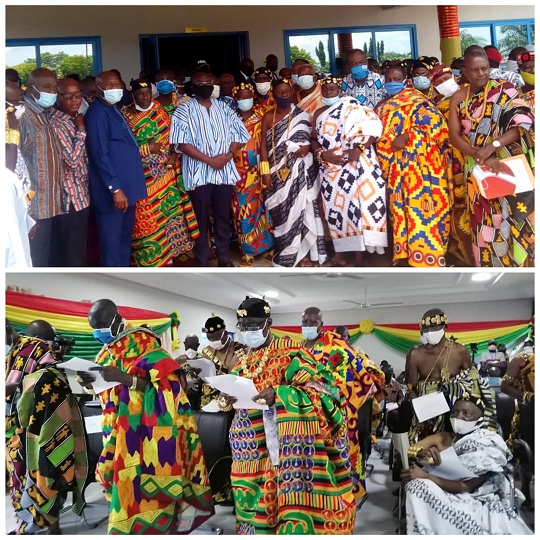 Vice President Dr Mahamudu Bawumia has inaugurated the reconstituted Oti Regional House of Chiefs as part of his working visit to the Krachi East Municipality on Tuesday.

Addressing the chiefs he said the Government was committed to strengthening the chieftaincy institution as an integral part of the national development process, especially in Ghana’s democratic governance dispensation.

He said despite the controversies some chieftaincy institutions were undergoing in some areas, the relevance of the institution to national development could not be underestimated.

Dr Bawumia said: “After a long struggle I am happy to be part of this history of the creation of a region and a Regional House of Chiefs.”

He said the inauguration was necessitated by historical considerations to accelerate development of the country in fulfilment of the New Patriotic Party’s 2016 Manifesto promise.

Dr Bawumia said the initiative would change the administrative boundaries of the country with the key objective of fast-tracking the development of the area.

He enumerated a number of success stories of the Akufo-Addo-led government, which include the restoration of teacher and nursing training allowances and employing many of them, implementation of the Free Senior High School, creation of the Nation Builders Corps (NaBCo), Zongo Development Fund, One-District-One-Factory, digitisation of the economy and one district, one warehouse.

The vehicles; one Nissan Pickup and land cruiser, were presented to Nana Besemuna Mprah III, Paramount Chief of Kete-Krachi.

Mr Dan Botwe, the Minister of Regional Reorganisation and Development, expressed joy at the creation of the region after the long struggle and the resilience of the people to see to its fruition.

Nana Mprah, Krachiwura, on behalf of the Regional House of Chiefs, commended President Nana Addo Dankwa Akufo-Addo for honouring the 2016 Manifesto promise of creating the regions.

He was grateful that Vice President Bawumia visited the region to inaugurate the Oti Regional House of Chiefs and gave the assurance of greater collaboration between the chiefs and the Government in pursuance of development projects.

The Krachiwura said it had taken over half a century to achieve that, adding that it would break new frontiers for accelerated development.

He commended the Government for setting the pace in establishing the Free Senior High School and 1D1F, which would improve the human resource base of the country and create jobs respectively.

Nana Mprah requested for two million Ghana cedis as seed money for investment and to use the proceeds to run the activities of the House.

He expressed gratitude to government, on behalf of the people, for giving them identity.