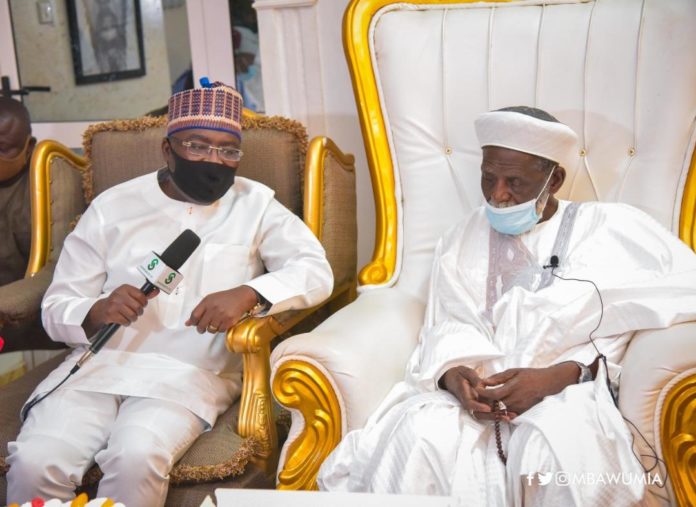 Vice President Mahamudu Bawumia, on Sunday, paid a courtesy call on the National Chief Imam, Sheikh Dr Osman Nuhu Sharubutu, to seek Allah’s blessings for victory in the December 7 Election, to serve the nation for another four years.

This was after he had officially informed him about his nomination as the running mate of President Nana Addo Dankwa Akufo-Addo, the New Patriotic Party’s flagbearer for the 2020 general election.

Dr Bawumia told the National Chief Imam, at his Old Fadama Residence, that he was mindful that: “It is Allah who gives power to any individual to serve the nation in any capacity, therefore it is imperative to seek his prayers and to invoke Allah’s blessings and protection as he seeks the mandate of the people”.

The Akufo-Addo-led Government over the three and half years, he said, had embarked on various infrastructural development projects in Zongo Communities.

These included the provision of water facilities, school blocks and places of convenience through the Ministry of Zongo and Inner Cities Development, while the Zongo Development Fund was to alleviate poverty and transform lives, he said.

Through the Zongo Development Fund, the Vice President said, the Scholarship Secretariat and his Office, had sponsored 40 students from Zongo Communities across the country to study Medicine in Cuba.

He assured of the Government’s determination to continue prioritising the provision of education in its developmental agenda.

In addition to its implementation of the Free Senior High School Policy, the Government would, next year, construct 16 Model Senior High Schools across the country as part of its efforts to transform lives and empower the youth.

“I believe that prioritising education will reduce poverty and transform lives in the Zongo Communities and so over the past three and half years, the Akufo-Addo Government has been providing the real needs of the people”.

The National Chief Imam, through his Spokesperson, Sheikh Aremeyaw Shaib, expressed gratitude to the Government for seeking the welfare of Muslims and all Ghanaians.

He lauded the Vice President for his humility and prayed for Allah’s continuous guidance and blessings for him as he sought the mandate of Ghanaians.

“Allah should continue to help you and not disgrace you, increase and honour you,” he prayed.

The National Chairman of the ruling NPP, Mr Freddie Blay, lauded the Chief Imam for being an embodiment of unity and peace in the country.

He expressed gratitude to him for his wise counselling over the past three and half years and assured that the Government and the Party would continue to drink from his fountain of wisdom as they sought four more years to serve the people.