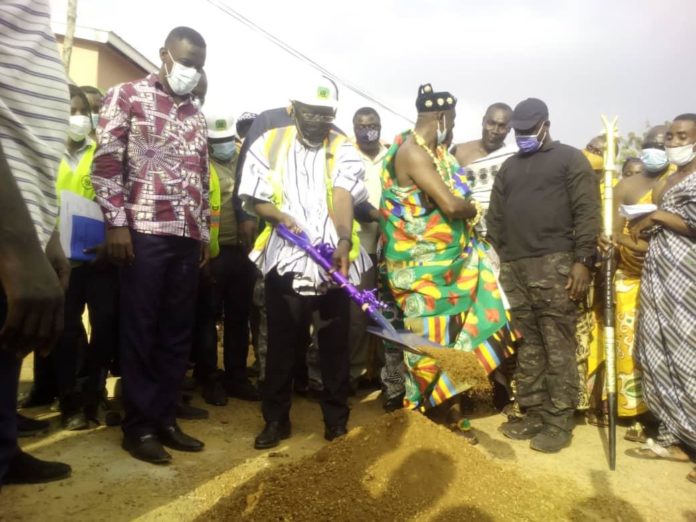 Vice President Dr. Mahamudu Bawumia has cut the sod for the upgrading of Sureso – Samreboi road in the Amenfi West District of the Western Region as part of government’s commitment towards improving the country’s road network.

Addressing a durbar of chiefs and people of Sureso as part of his two-day working visit to the Western Region, he explained that the project would serve as an alternate route for commuters who would like to avoid the traffic congestion within Asankragwa town when heading towards Bawdie from Samreboi.

He further explained that the road would improve upon the socio-economic status within Sureso, Aboi, Asankragwa, and surrounding communities and create direct and indirect jobs for the citizenry, especially the indigenes.

According to him, this year’s election was about records on performance since the two main contesters have been in government and so Ghanaians must weigh the difference and decide for themselves.

Dr. Bawumia, therefore, called on Ghanaians to have confidence in the Nana Akufo-Addo-led administration and retain them to do more for the people of Ghana by voting massively for the NPP in the December 7 polls.

The project, when completed, would help companies like the Samatex Timber & Plywood Co. Ltd. in reducing their cost of operation since they could conveniently convey their raw materials and finished products through a good road.

On the progress of work, site clearing has been done with 10 percent scarification of work and three percent of earthwork done.