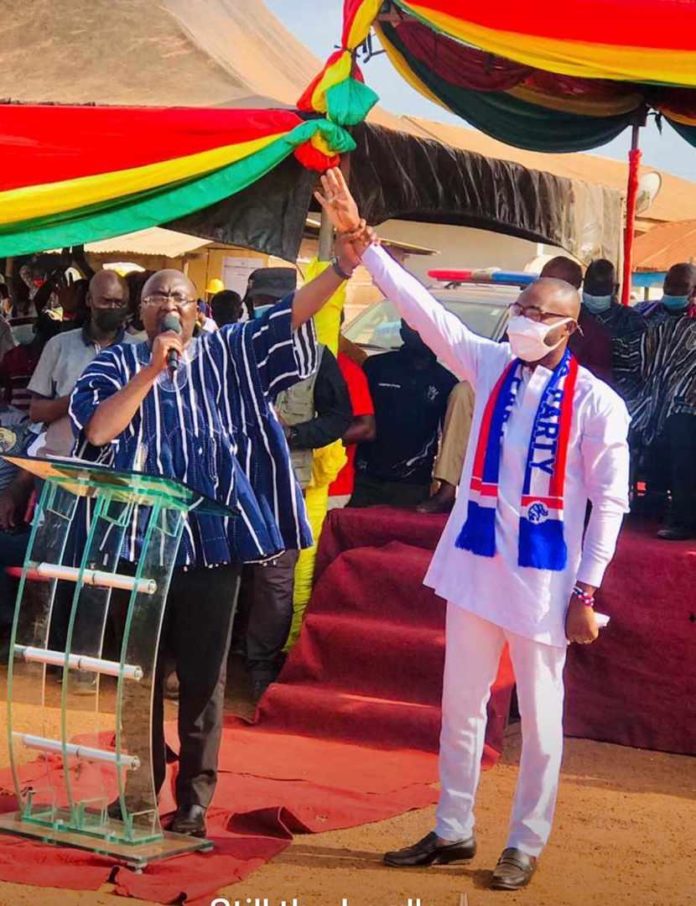 The Vice President, Dr Mahamudu Bawumia has rounded up his two-day tour of the Western North Region with a call on Ghanaians to renew the mandate of the Akufo- Addo led government.

He said the NPP government had a solid foundation in all sectors of the economy and needed another four years to make it a reality.

Dr Bawumia outlined the creation of six new Regions of which Western North was part, the introduction of teacher and nursing trainee allowances, re-introduction of allowances for Islamic teachers, revamping the Cocoa sector by introducing Cocoa rehabilitation programmes among others as the achievements of the government in its first term.

The Vice President in his two-day tour inspected works on the construction of Benchema-Barrier to Adjoafuo road and also commissioned a number of projects including the lecture hall of the Bibiani Health and Allied science college.

At all the places visited, the Vice President was met with enthusiastic supporters of the NPP to welcome him.

Speaking at separate durbars of chiefs and people at Akatiso, Debeiso, Yawmatwa, and Adabokrom in the Bia West and Bia East constituencies, Dr Bawumia entreated residents to renew the mandate of the New Patriotic Party (NPP) to show appreciation to President Akufo -Addo and NPP for the creation of Western North Region.

He explained that the next NPP government would ensure that students would no longer use guarantors to apply for students loan but would need just their National Indentifiction Cards.

Mr Kingsley Aboagye Gyedu, Western North Regional Minister on his part, said residents owed it a duty to vote for the NPP since Nana Akufo-Addo and the NPP had done what successive governments could not do for over 42 years.

“The Upper West Region has remained loyal to the NDC because former President Rawlings created that Region for them, let’s also vote for the NPP to show appreciation for the creation of Western North Region”.

Alhaji Fuseini Yakubu, spokesperson for Bia West Chief Imam commended the Vice President for his role in ensuring that seven Muslims from the District visited Mecca which had never happened in the history of the District.

Nana Kofi Asumani II, Chief of Sefwi-Debeiso said the people would forever remain grateful to the NPP government for the creation of Western North Region, free senior high school, the construction of Debeiso -Oseikojokrom road and free food for school pupils and the rehabilitation of old cocoa farms in the area.

Nana Asumani, therefore, appealed to the government to upgrade the new magistrate court at Debeiso into a Circuit Court since is unsafe for police personnel to transport culprits to Bibiani Circuit Court for court proceedings.

He further expressed gratitude to Mr Augustine Blay, Executive Secretary to the Vice President for assisting the community with iron sheets for the completion of an abandoned school block at Debeiso Senior High School since 2008 and asked the government to ensure that other abandoned projects in the school were completed.

He called for peace before, during, and after the December polls.