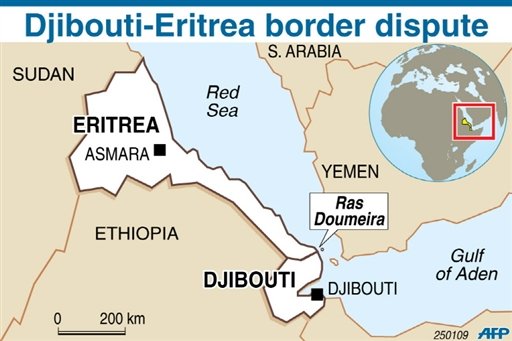 A dispute over territory involving the Horn of Africa states of Djibouti and Eritrea was reignited in the aftermath of the withdrawal of Qatari military forces stationed on the border of the countries on June 13.

Doha had served as a mediator in competing claims over Ras Doumeira Mountain and Island on the Red Sea coast near Bab al-Mandab Strait, a strategic shipping lane. Qatari troops were stationed in the area to prevent the potential of a resumption of armed clashes which erupted between Djibouti and Eritrea during June 10-13, 2008.

Qatari military forces serving as peacekeepers pulled out their personnel without any stated reasons. Speculation surrounding the Qatari moves suggests that the burgeoning split among the Gulf monarchies with Saudi Arabia, the United Arab Emirates and Bahrain making demands on Doha amid the imposition of an economic embargo, prompted the withdrawal from Ras Doumeira.

Djibouti and the self-declared independent Somaliland are supporting the position of Saudi Arabia, the UAE and Bahrain against Qatar. Somalia, Sudan and Ethiopia which are also supporting the claims against Qatar have as well called for talks to resolve the differences within the Gulf Cooperation Council (GCC).

Eritrea, which allows the UAE and Saudi Arabia to utilize its port at Assab for military purposes partly related to the ongoing war in Yemen, has taken a cautious line diplomatically on the confrontation despite being affected by the split in the GCC. Nevertheless, most media accounts indicate that Asmara is siding with Saudi Arabia, the UAE and Bahrain in their differences with Doha.

Seaport facilities and airports in Eritrea have been upgraded to accommodate the continuous bombardments of Yemen by Saudi and UAE warplanes aimed at defeating the Ansurallah movement which the GCC says is supported by the Islamic Republic of Iran. Yemen has been subjected to daily airstrikes and ground operations since March 2015 aimed at driving the Ansurallah (Houthis) from large swaths of territory inside the most impoverished nation in the Middle East.

Qatar has been accused by other GCC states of funding international terrorism, maintaining a Turkish military base on its territory and assisting the foreign policy aims of Tehran. Doha has categorically rejected the allegations and refuses to agree to the conditions called for by Riyadh, the UAE and Bahrain.

Saudi Arabia, the UAE and Bahrain with the support of Egypt on June 23 presented thirteen demands for Qatar to adhere to within ten days. These issues include the closing of Al Jazeera television network, the downgrading of relations with Iran, halting the funding of 59 targeted individuals and 12 entities labelled as terrorists such as the Muslim Brotherhood, Hezbollah and ISIS, and the removal of the Turkish military base in Doha.

Origins of the Present Territorial Dispute and its International Implications

The disagreements involving Eritrea and Djibouti over Ras Doumeira are directly a by-product of the demarcation of African colonized territories during the turn of the 19th and 20th centuries where the European imperialist states of Italy and France carved up the area. Later in 1935, Rome and Paris decided to apportion significant areas in Djibouti (then French Somaliland) to Eritrea then under Italian control.

After the defeat of Italian imperialism led at the time by Benito Mussolini during World War II, Eritrea became a British Protectorate and was eventually federated to Ethiopia in 1952. Later in 1962, Eritrea was incorporated into Ethiopia over the objection of the people in the former Italian controlled outpost.

Djibouti did not win its independence from France until 1977 which was relatively late in comparison to other previously colonized East African states. Eritrea proclaimed independence in 1991 after the three decades-long armed struggle and the collapse of the Ethiopian government of Mengistu Haile Mariam that same year. Two years later, in 1993, an internationally-supervised election in Eritrea garnered the state recognition by the-then Organization of African Unity (OAU) and the United Nations.

In April 1996, just five years after Eritrea had gained independence, the new government nearly went to war with Djibouti after Asmara was accused of shelling the disputed territory of Ras Doumeira. The crisis deepened by April 16, 2008 when Djibouti reported that Eritrean troops had established military fortifications digging trenches on the border near Ras Doumeira.

The Djibouti government sent a letter to the United Nations requesting intervention saying a revised map published by Asmara claimed Ras Doumeira as Eritrean land. Conversely, Eritrea claimed it had no territorial problems with Djibouti denying that troops had been deployed to the border areas.

Former Ethiopian Prime Minister Meles Zenawi responding to the escalating tensions on May 15, 2008 asserted that the disagreement was a “threat to the peace and security of the whole Horn of Africa” noting Addis Ababa had no choice other than securing its trading route through Djibouti if war erupted. Ethiopia, a landlocked state, has been dependent upon Djibouti for access to the Red Sea since Eritrea declared independence in 1991.

On June 10 of the same year, the Djibouti government reported that 21 Eritrean troops in the area defected to their side of the border. Eritrea demanded the repatriation of the soldiers opening fire on the Djibouti forces.

Clashes continued for three days claiming the lives of an estimated 140 soldiers on both sides of the conflict. Djibouti called up retired military and police units to engage in the battle.

France, which has a large military base along with the United States at Camp Lemonnier, provided logistical and technical support to Djibouti. The fighting ended after three days. Later in 2010, Qatar agreed to station 450 troops in the Ras Doumeira border area to prevent further fighting. The UN said in 2009, that Eritrea had failed to withdraw its forces from the Ras Doumeira areas under dispute.

The withdrawal of Qatari soldiers has raised the specter of renewed clashes between the two nations. Djibouti’s UN Ambassador Mohammed Idriss Farah claims that Eritrea has moved into the areas previously held by Qatari troops.

Eritrean envoy to the AU, Araya Desta, said of the current situation: “We don’t want to take any of Djibouti’s land. The last time we had some skirmishes. It was unnecessary.”

The AU Peace and Security Council (PSC) issued a statement after the complaint filed by Djibouti over differences with Eritrea. The continental organization convenes its bi-annual summit in Ethiopia on July 3-4.

According to the PSC: “The Chairperson of the Commission, Moussa Faki Mahamat, is following the recent developments between the Republic of Djibouti and the State of Eritrea in the aftermath of Qatar’s decision to withdraw its peacekeeping troops at the Djibouti- Eritrea border. The Chairperson of the Commission appeals for calm, restraint and stresses that the AU is fully seized with the matter. He highlighted that the AU Commission, in close consultations with the authorities in Djibouti and Eritrea, is in the process of deploying a fact-finding mission to the Djibouti-Eritrea border. The Chairperson of the Commission stands ready to assist Djibouti and Eritrea to normalize their relations and promote good neighborliness within the framework of relevant AU instruments.” (http://www.peaceau.org/en/article/press-release-au-commission-calls-for-restraint-on-the-djibouti-eritrea-border)

These developments in the Horn of Africa are a continuation of the conflicts emanating from unresolved European colonial-era border demarcations. Also the current split within the western-allied Gulf Arab governments and the dependence of these African states for economic revenue generated through usage of their territory and waterways, which has compelled AU member-states such as Somalia, Djibouti, Eritrea and Egypt to side with the anti-Qatari forces does not bode well for continental security in the long term.

Moreover, the political and security interests of various states in the Middle East which routinely work in conjunction with U.S. foreign policy interests are inevitability the concern of the AU. Consequently, Africa has to pay close attention to events unfolding within the GCC countries and their allies and seek the resolution of these conflicts in a manner which curtails the potential for a destabilizing impact on continental states.