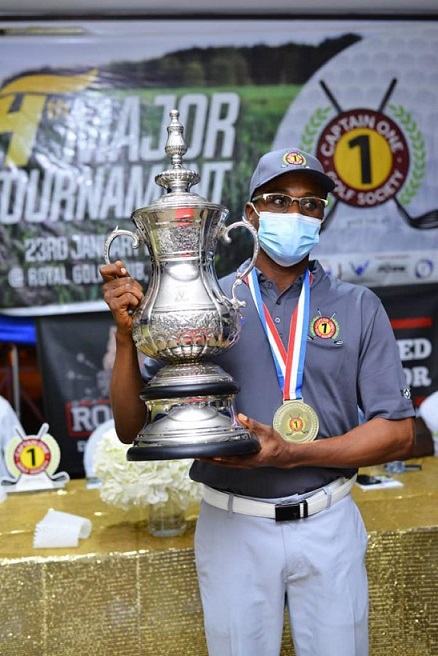 Mr Vincent Torgah from Centre of the World Golf Club, successfully defended his title in the second of four series of ‘Road to Obotan’ played at the Safari Golf Club at Adukrom in the Eastern Region.

Dubbed Cedrela Open, the championship formed part of a mini tournament being organized for the Road to Obotan Championship. The first mini tournament was dubbed Mahogany Open held at the Samartex Golf Club at Samreboi in the Western  North Region in March this year.

Torgah, who is also a teaching professional at the Samartex Golf Club returned with a staggering total score of 221 which is minus eleven for the course par after four days of golfing.

He was awarded with a cash prize of GH₡17,000 and the enviable bragging right as the defending champion with a double win.

He was closely followed by experienced golfer, Emos Korblah from the Achimota Golf Club who returned with a total score of 233 and took home a cash prize of GH₡10,000.

Finishing third was a young golfer, Augustine Manesseh who returned with a total score of 234 and took home a cash prize of GH₡8,000.

Other golfers who made it to the money zone from fourth position to the 19th  position were Lucky Ayisah, E. K. Osei, Yaw Barry, Francis Torgah, Prince Amponsah, Kojo Barnni and E. K. Owusu.

A total of four scratch golfers also played tournament to seek qualification to become professionals and after two days of play, Makafui Awudu Dzuke emerged winner with a score of 125 followed by Daniel Asemani with a score of 136,

Francis Doykey with a score of 144 and Teye Lartey with a score of 145.
Speaking in an interview with the media, Torgah said he was excited to win the competition and said it was achieved through hard work and lots of commitment.
He commended his fellow competitors for pushing him hard to get the win and mentioned that he would continue to train hard because “now my colleagues would be gearing up for the third of the four series so I also need to step up my game.”
The Road to Obotan Championship is an additional tournament for professional golfers in the country. After the Mahogany Championship and Cedrela Open, there would be the Odum Open to be played at Samartex and then the Obotan Tournament which is the main event to be played at Safari Valley.