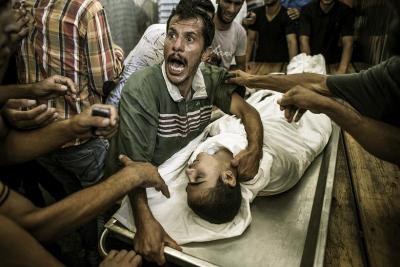 At least five Palestinians and one Israeli soldier were injured in overnight fierce clashes in Jenin refugee camp in northern West Bank, medics and security officials said on Tuesday.

Hussein Qubaha, in charge of nursing at Jenin Hospital, told Xinhua that one of the five Palestinian casualties is in moderate condition, while the four others were lightly injured.

Witnesses said the clashes broke out when an Israeli army force, backed by armored vehicles, stormed the refugee camp while firing tear gas and percussion bombs at dozens of young men who threw stones at the soldiers.

Security officials in northern West Bank said the Israeli soldiers stormed several houses in the refugee camp after erecting roadblocks at its entrances, and they checked Palestinian vehicles.

Residents of the camp said that the soldiers arrested two Islamic Hamas movement activists from their home in the camp.

Meanwhile, the Israeli army announced on Tuesday that its forces arrested around 12 Palestinians in the West Bank after storming homes in several towns and villages in the territories. Enditem