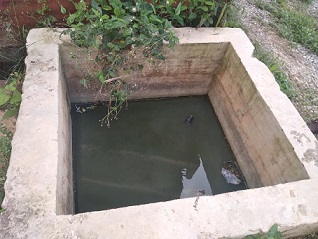 A viral video that emerged on various social media platforms earlier this week that seemed to suggest that students of Bosomtwe Oyoko Senior High School in the Bosomtwe District drink from an abandoned well has turned out to be false.

A visit to the school by the Ghana News Agency (GNA) on Thursday revealed that the said well in the video is not the source of drinking water for the students as portrayed in the video.

The school has a mechanised borehole that provides regular supply of potable water to the over 600 students and staff of the school.

IT was realized that the ‘well’ in question is not a well but a dugout left behind by the contractor who constructed the school.

The information gathered by the GNA, indicated that it is a trench dugged by the contractor to collect excess water in the land because the site is waterlogged.

The water in it is unwholesome and virtually impossible for humans to consume under any circumstances.
Mr. Isaac Kofi Oppong, Assistant Headmaster of the school who led the GNA to inspect facilities in the school, said the video came as a shock to the management of the school.

He said the video was a misrepresentation of the true situation in the school and questioned why anyone would embark on such a smear campaign to hurt the reputation of the school.

He said though the school was grappling with a lot of challenges, but water is not one of them and urged the public to disregard the video.

“We are also parents and there is no way we shall allow the children to drink water from such source”, he noted.
He said such publications create apprehension among parents and could also disrupt academic work if parents decide to troop to the school.

Mr. Oppong assured parents that their wards were in good hands and that management would continue to prioritize their welfare.