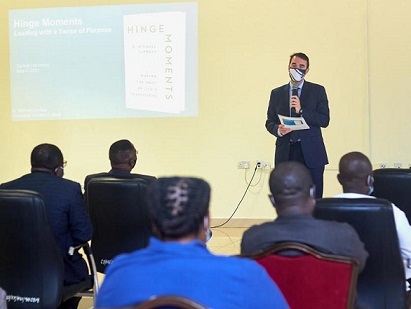 Dr Michael Lindsay, President of Gordon University, USA, says one of the things that makes mankind succeed in life is the ability to nurture virtues that open up one’s destiny to lead a fulfilled life.

He explained that virtues are like door hinges with the ability to let a door open and close, signifying the ability to allow one chapter of lives to open and the other to close, which is necessary for personal development.

Dr Lindsay made this known in a Public Lecture, “Hinge Moments—leading with a sense of purpose,” at Central University before the signing of an academic collaboration agreement between the two institutions.

“So we cultivate virtues like courage, wisdom, self-control and justice because it becomes a primary way that the Lord accomplish His will in our lives through the many changes we encounter in the journey of life,” he asserted.

Dr Lindsay explained that change was about the transformation of the soul and that, in the process of change, one was expected to cultivate values that would serve as hinges, which guided our ability to adapt to situations.

He said a man had about 37 million minutes to live on earth, and it was just a handful of those moments that changed our lives, therefore, the need to approach such moments with the right virtues.

He indicated that those few moments, known as the big hinge moments, “are the minute one is born, the minute one marries, the minute one lands their first job when one loses a close family member,” which crucially defined activities in life and ought to be taken seriously.

Dr Lindsay said everyone, at some points in time, would experience the hinge moments, and so what virtues did was that they prepared us for those moments for us to make good decisions when such moments came.

He noted that the virtue of discernment, for instance, became necessary to identify and know what to do during such crucial moments.

He indicated that change was important because it led one to a new face in life with its opportunities and challenges.

He said, in this new era, one’s ability to hold on to the right virtues was crucial since it helped one to make good impressions, which was necessary for one to be accepted in the new space.

“In this new era, one had only one chance of making a good impression, which meant that one ought to learn to know people personally and have the ability to listen.

“This would lead to a situation in which one would learn how to trust people and be trusted, which was key to unlocking doors in this new era,” Dr Lindsay stated.