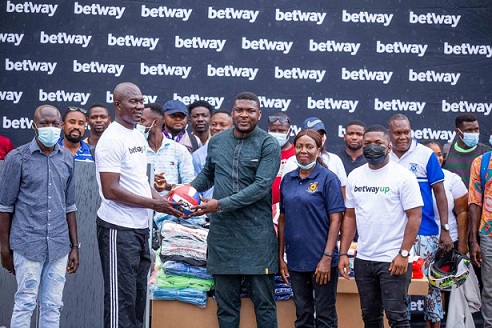 The training seminar which falls under the Betway Up programme was aimed at uplifting community sports teams in the Eastern Region.

The community teams were sensitized in the areas of sports science, coaching and fitness.

The event also saw a practical session at the Koforidua Technical University volleyball court which offered the participants the opportunity to demonstrate their volleyball prowess under the supervision of former national volleyball team captain, Mr. Eric Antwi Ofori.

Dr. Aniemena-George Chidi, a Sport and Exercise Physician Scientist and Team Doctor for Obuasi Ashanti Gold Sporting Club, engaged the players on sport science centered on the need to engage in sports and healthy activities.

He advised that to be able to stay fit and be at the peak of their performances at all times, athletes must be cautious of the food they eat given that some foods take longer time to digest which could affect their performance on the field.

‘One of the nutritious but cheapest foods we have in this country is cocoanut water and I will recommend to all teams to priorities it because it is rich and good for the wellbeing of their players”, he said.

Dr. Chidi entreated them to exercise control, apply concentration, and always remain confident and committed to the sports.

For his part, Mr. Eric Antwi Ofori, urged the athletes to exercise humility wherever they find themselves and also to be focused on their goal, adding that was the only way to success.