Volta and Oti regions recorded eleven wind and rain storms in fourth quarter of 2019 compared to 19 recorded in the third quarter of same year.

The Director said a total of 231 people, made up of 41 male adults, 51 female adults, 57 boys and 82 girls were affected by the fire, but with no death recorded.

He said one bush fire was also recorded in one municipality in Oti region, which affected one community and four houses, and destroyed four acres of farm lands.

The Director said a total of 27 people made up of eleven male adults, six female adults and 10 girls were affected by the bush fire.

Mr Bosson said the Regions also witnessed one incident of building collapse, which affected one community and two houses, adding that eight people made up of three male adults, two female adults, two boys and one girl were affected.

The Director said the estimated cost of damage by these disasters was at Ghc401, 092.00
He said his outfit was putting all the necessary disaster prevention and management mechanisms in place to ensure effective disaster risk reduction in the regions for accelerated socio-economic development.

The Director said disasters were one of the major setbacks to the nation’s quest for development as they continued to derail progress made by the country anytime they occurred.

He said it was therefore imperative for all the citizenry to support the Organization in its disaster prevention, management and risk reduction drive so that “we can achieve disaster resilient country we have been craving for to achieve a rapid economic growth”.

Mr Bosson said his outfit would continue with its sensitisation activities to educate the public on the need to desist from activities that could lead to disaster and urged various institutions and organisations to put disaster preventive measures in place at their premises to forestall disaster. 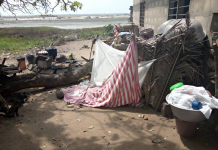