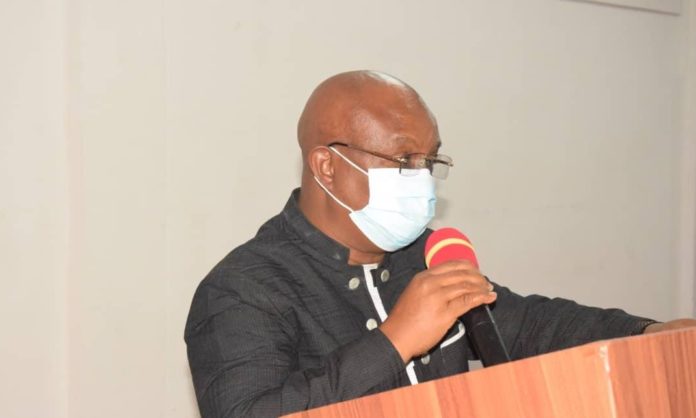 Dr Archibald Yao Letsa, Volta Regional Minister has stated that his outfit was taking the necessary effort to see to the completion of the Regional Centre for National Culture’s (CNC) theatre before the end of his tenure in office.

He said programmes and activities of a theatre had a great impact on the morals of society, hence, his determination to ensure its completion so that the Region would not be denied such theatrical activities in the future.

The Minister, speaking at a meeting of Conference of Directors and Accountants of Centres for National Culture-Ghana, held in Ho, noted that the theatre when completed, would contribute tremendously to the operations and activities of the CNC in the region.

Dr Letsa said the region was endowed with rich cultures, ranging from festivals, music, dance as well as aesthetic handicrafts among others, therefore, deliberate steps should be taken to showcase them to the rest of the world to influence “our society in diverse ways.”

He said the culture and creative sector was an economic driver and innovation, adding that in many regions, specialisations in this industry were evolving, and being used to tackle competitive societal challenges from new angles.

The Minister said the drop in purchasing power and reductions of public and private funding for arts and culture, especially at the local level could amplify the anticipated lower levels of international and domestic tourism.

He called for responsive public support and recovery strategies for the cultural and creative industry to keep it afloat to forestall the negative impact of the situation on cities and regions in terms of jobs, revenue levels and innovation, citizen well-being, vibrancy, and diversity of communities.

Mr Barima Asumadu-Sakyi, Dean of Conference of Directors and Accountants of Centres for National Culture-Ghana, underscored the importance of culture and creative industry in accelerating national development.

The Dean said culture and the creative sector played a significant role in the country’s progressive match, thus the need for conscious effort to maintain the industry.

He said according to UNESCO’s Cultural for Development Indicators, culture employed 0.06 per cent of the nation’s total employed population in 2010, and culture activities contributed 1.5 per cent of the country’s Gross Domestic Product ( GDP) in the same year.

Mr Asumadu-Sakyi said the relevance of culture to national development was evident in key state documents including the Cultural Policy of Ghana (2004), Ghana Shared Growth and Development Agenda (2010-2013), and the National Tourism Development Plan (2013-2027).

He lamented that though culture continued to have a significant impact on the country’s growth, the relevance of cultural activities was being underestimated by the state actors, and this was having a serious toll on cultural administration in the country.

The Dean called for drastic and pragmatic mechanisms to deal with the situation to make the sector more vibrant.

The meeting was on the theme; “The emerging roles and challenges of cultural administration in Ghana.” and provided a platform for the directors and accountants from the 16 regions to deliberate on issues concerning the progress of the Centres.