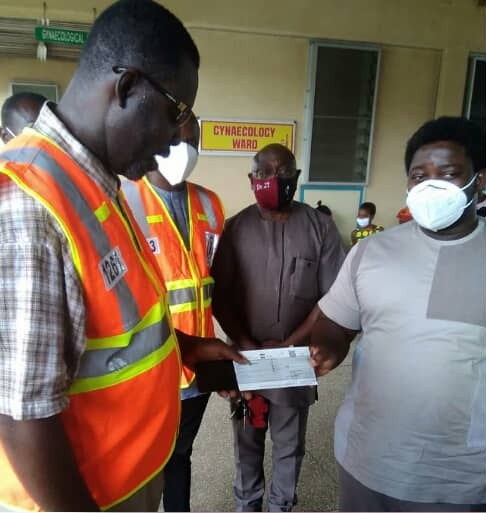 The Volta Regional Directorate of the National Disaster Management Organisation (NADMO) has presented a cheque for GHC2,000.00 to victims of gas explosion at the Mighty Gas Station in Ho.

A total of 14 people are receiving medical attention from various burns ranging from 70 to 97 percent burns, during an explosion at the station last Wednesday. Mr Divine Bosson, Regional Head of NADMO said it was their widow’s miteto the victims.

He called on public and private spirited institutions to support the victims, who demand consumables and medication to surmount the difficulties.

He commended the Ghana National Fire Service for responding to a distress call with dispatch to quell the fire.

Dr Nelson Affram, Head of Surgery of HTH said a victim had burns up to 97 percent with the rest suffering from between 90 and 70 percent burns adding that the majority of victims were having inhalation burns making their cases more severe.

Mr Samuel Boateng, Manager of Mighty Gas Station Limited suspected a spark from one of the vehicles in the queue to be served ignited the fire at about 0510 hours on Wednesday.

He said within seconds fire had engulfed the gas segment of the Station, injuring staff and clients.

He said as standard practice, all employees were taken through fire-fighting drills and received certification.

Some 14 victims of the incident are receiving medical attention at the HTH with various levels of burns with the most critical one about 97 percent burnt.