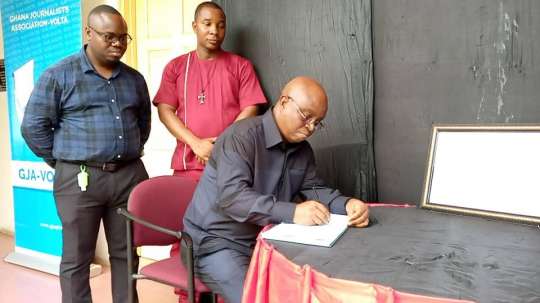 The Minister commiserated with the Ghana Journalists Association (GJA) and the bereaved family, describing the death as “unfortunate” adding that, “we lost a very key participant in our democracy”.

He said for a very long period he had worked with Kumaga and knew him to be someone who was always serious with his job, saying “we lost him too early; we will miss his powerful and commanding voice on the airwaves.”

“The Volta GJA and the rest of us in the Region have lost a great broadcast journalist …we would forever miss his baritone voice on Volta Star Radio,” he added.

Dr Letsa said the Regional Coordinating Council would provide the necessary support to the GJA and the bereaved family to ensure that he was given a befitting burial.

Mr Anthony Bells Kafui Kanyi, Volta GJA Chairman, described the late Kumaga as “master of the airwaves” who discharge his duty with high level of professionalism, adding that the inky fraternity would forever miss him.

Mr John Gadawusu, Acting Director of GBC Volta Star Radio, said the late Kumaga was a great pillar in the media industry, therefore his death had created a great vacuum in the industry.

“A pillar in our industry is broken and a big vacuum is created but we are hopeful to carry on with the battle,” he stated.

Mr Kumaga, 49, was, until his demise on Thursday March 11, 2020, the Programmes Director of GBC Volta Star and a host of the Morning Show.

Ho MCE directs people with buildings on waterways to relocate

Group calls on NPP leadership to preserve the party’s unity

Police to deploy men to ensure security during 31st night