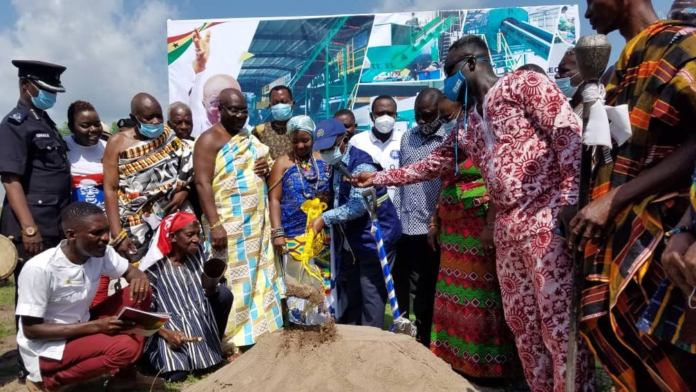 Dr Archibald Yao Letsa, Volta Regional Minister has cut-the-sod for the construction of a 15 million Euro solid waste composting and recycling plant for the Volta Region at Akrofu in the Ho Municipality.

The facility, a 400-tonner to be completed within a record time of four months, is a public-private-partnership venture of the government and the Jospong Group of Companies and its partners.

It forms part of 16 being constructed across the country and it is expected to create 75 direct, and 200 indirect jobs.

The Regional Minister said the project fell in line with the NPP government’s commitment to transforming the sanitation sector of the country.

Dr Letsa said the capacity of the plant would help address the solid waste disposal challenges facing the Region, and reiterated that the government would continue to provide increased access to water and sanitation as tools to fight disease incidence.

He promised the project’s timely completion and assured value for money.

Madam Gloria Anti, Deputy Managing Director of Zoomlion, said the plant was a make of the latest technology and would process inputs into organic fertilizers and raw materials for industrial plastic.

She said the Volta Region produced an estimated 10,000 metric tons of waste annually, and that the plant would become a concrete youth employment avenue.

The Director said the plant would help ensure the general well-being of the people of the Region, and would go a long way towards the attainment of the SDGs.

She thanked President Akufo Addo for making the project possible, and for “personally leading and contributing towards deepening the course of a clean Ghana.”

Madam Cecelia Dapaah, Minister for Water, Sanitation, and Hygiene said the Ministry appreciated the project’s contribution towards gains in the water and sanitation sector and would continue to support such initiatives.

She said the government would continue to pursue policies to ensure the best services in sanitation, and appealed to the Roads Ministry to guarantee that waste management sites were accessible.

Mamaga Akua Sabea Nyabor, Queen-mother of Akrofu Traditional Area, who chaired the occasion, said the project must be delivered as promised, adding, “it shouldn’t be only a sod cutting. It must materialise.”

She touted the area’s crop of artisans and labour hands and asked that locals were engaged on the project.

The Queen-mother appeal for the rehabilitation of the segment of the damaged Sokode to Kpeve road that traverses the community.

The road provides a shorter access to the South Dayi district and has a daily vehicular traffic of over 2000.