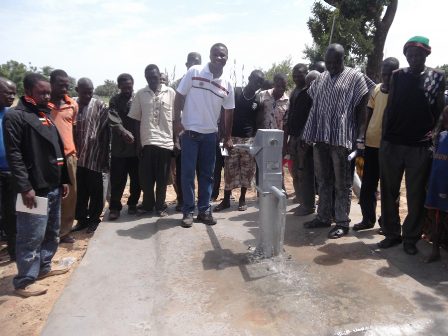 A Non- Governmental Organization called The Voice of the Nation (VON) has embarked on a benevolent exercise by constructing a borehole worth¢5,600 for the residents of Abenabo in Suhum District in the Eastern Region.

Commissioning the borehole, the Chairperson for the Voice of Nation Hon Mariam Ibrahim, noted that prior to their visit to the village they noticed that residents lacked potable water and largely depend on a stream which has been causing illnesses to the people .

“It was in this regard, The Voice of the Nation took a swift decision to respond to their dire need in order to save them from untimely deaths .More so, the NGO is scheming to construct another borehole for the residents “, she disclosed.
According to her , the aim of the NGO is to assist the vulnerable in the society . By doing so , it would alleviate the burden on the government since it cannot shoulder all responsibilities alone.

“We have also donated stationary to some schools in the District as part of efforts of enhancing teaching and learning”, she noted.
The Voice of The Nation (VON) has the welfare of the Nation at heart, especially working towards the sustenance of peace in the society . In the view of this, we have been embarking on various social interventions and a peace projects in a bid to ensure a peaceful society during and after the elections.
However, residents, who could not hide their joy, expressed their happiness and gratitude after commissioning the project. Since they have been depending on a stagnant water for the past 30 years.
Since several appeals to Philanthropists, and other renowned organizations to come to their aid proved futile until The Voice of The Nation listened to their golden voice.
The facility would go a long way to improve upon sanitation in the town and prevent us from contracting communicable diseases.