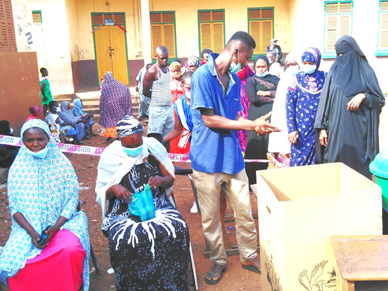 Voter turnout in the presidential and parliamentary elections has been encouraging across the various constituencies in the Ashanti Region.

At the Railways Police Station Two in the Subin Constituency, Mr. Osei Bempah, the Presiding Officer, told the Ghana News Agency (GNA) that 367 out of the 597 registered voters had cast their ballot, as of 1400 hours.

Two hundred and sixty-six (266) people had voted at the Maakro Methodist Mission Polling Centre in the Suame Constituency, seven hours into the exercise. This centre has 365 registered voters.

As of 1400 hours, 364 out of the expected 471 voters at the Kronum R/C ‘A’ Centre had already exercised their franchise.

At the Suame Methodist Church ‘B’, 289 out of the 437 expected voters had voted.

Four hundred and twenty-eight (428) out of the 845 voters at the Ampabame Primary ‘A’ and ‘B’ in the Ejisu Constituency had successfully gone through the exercise.

One hundred and fifty-three (153) out of the 229 voters at the Old Community Pharmacy Polling Centre in the Kwadaso Constituency had voted by midday.

At the Atwima-Mponua Rural Bank Polling Station, out of the 721 expected voters, 467 had voted.

Two hundred and twenty-five (224) out of the 384 registered voters in the Beposo Post Office ‘B’ Pulling Centre in the Beposo-Kwamang Constituency had exercised their franchise.

At the Beposo Presbyterian Primary, 327 out of the 665 voters had cast their ballot while 287 out of the 493 had finished voting at the Presby JHS Centre.