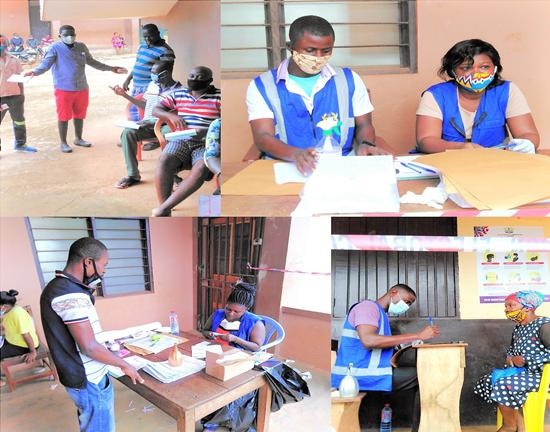 Over three million eligible voters have registered as at day nine of the nationwide voters’ registration, Mr Samuel Tettey, Deputy Chairman in charge of Operations has said.

Of the figure, more than two million of the eligible applicants presented Ghana Card as their form of identification representing about 66 per cent, he said.

Speaking at the ‘Let the Citizen Know’ media briefing, Mr Tettey said the use of guarantor avenue to back their application was about one million indicating about 32 per cent while the use of passport followed with about 60, thousand representing two per cent.

“Let the Citizen Know” is an initiative that seeks to engage the electorate on its activities and processes ahead of the 2020 General Election.

It will also be a platform where the Commission would receive feedback, respond to questions and address concerns on a timely and regular basis.

Mr Tettey giving an assessment of the queue management system said four days into the introduction system at registration centres, has helped reduced congestion at many of the centres.

The performance of the new Biometric Voter Registration (BVR) kits and the fingerprint scanners are robust, effective and efficient.

Most registration teams were able to register an average of 150 applicants per day per centre with some recording as high as 359 in a day with the support of mobile teams.

“The performance of the registration officials is such that it takes an average of five minutes to process an applicant,” he said.

Some of them are; Anglican Primary School Akramaman – 281 in Ga West. Kumbumgu-Aboabo – 260 in Tamale Metro and Don Bosco Catholic Girls Primary School – 261 in Gomoa.

On the adherences to the COVID-19 protocols, he said the situation had improved and were wearing face masks and also keeping to the social distance protocols.

“However, the same cannot be said of some number of centres in certain places such as Accra Metropolis, Tema and Ashiaman, where observing social distancing still remains a challenge,” he noted.