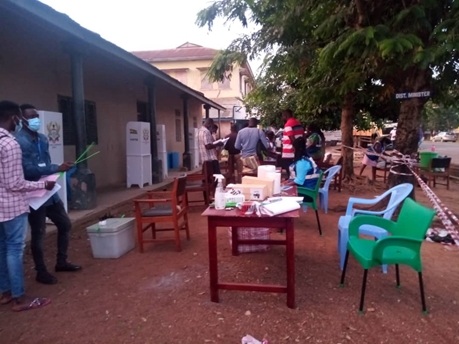 Voting to decide who gets the mandate of Ghanaians to govern the West African country in the next four years, got off to a smooth start in polling centres across the Ashanti Region.

Voter enthusiasm appears to be high as long queues had been formed hours before the exercise began at exactly 0700 hours.

The atmosphere is generally calm and relaxed with no reported nasty incident at any of the centres.

A visit to some of the centres by the Ghana News Agency (GNA) saw voters patiently waiting for their turn to cast their ballot.

At the Trinity Methodist Church – Aketego, in the Oforikrom Constituency, Mr. Kwame Osei, the Presiding Officer, said they had not encountered any problems.

A total of 731 registered voters are expected to vote at that centre.

Forty-One (41) people had voted within the first hour of voting at the Manhyia Palace Polling Centre Two. In all there are 257 registered voters in this centre.

At the Manhyia Palace Centre One, 55 out of the 308 registered voters had already voted as of 0815 hours.

Almost, one and a-half-hours into voting, 61 out of the 394 registered voters at the Afikesiem Polling Centre at Alabar, in the Manhyia South, had cast their ballot.

Seventy-eight (78) people had voted at the Adanpapa Centre ‘A’ in the Bosomtwe Constituency, 45 minutes into voting.

Things were not any different at Old Asonomaso Presby JHS, in the Kwabre East Constituency, where 12 people had successfully gone through the exercise, 15 minutes after it started.