Mr Emmanuel Antwi-Darkwa, the Chief Executive Officer (CEO) of the Volta River Authority (VRA), has expressed satisfaction with the progress of work on the 17-megawatt solar project in the Upper West Region.

He commended the contractor in charge of the project, who according to him paid attention to the operational and construction practices of the project.

Mr Antwi-Darkwa was speaking to the media at Lawra during a visit to the project site to inspect the progress of work and to assess challenges of project execution for redress.

President Nana Addo Dankwah Akuffo-Addo this year, cut the sod for the construction of the 17-megawatt solar project in the Upper West Region.

The project 13 megawatts is at Kaleo in the Nadowli/Kaleo District and four Megawatt at Lawra in the Lawra Municipality.

“The project has been well executed from the design phase to the construction. I think it’s a great project. There is great attention to details as far as the operational and construction practices are concerned. I think, all in all, I will congratulate the contractor for good work done,” the VRA CEO said.

Mr Antwi-Darkwa noted that the project could not be completed within six months as scheduled due to the outbreak of the Coronavirus (COVID-19) pandemic in the country.

He explained that the project formed part of the government’s climate agenda to reduce the carbon effect.

“The more renewable energy you develop the more improvement you get in the carbon footprint as you are not generating energy from fossil fuel,” he said.

Mr Antwi-Darkwa said the project would provide an opportunity for a large scale utility project in the area. He said it would also bring opportunities, including job opportunities for both skilled and unskilled labour.

Mr Isaac Badu, the Project Manager for the VRA, said the capacity of the 4-megawatt solar project at Lawra was increased to 6.5 megawatts at no cost to the government.

He said the project was about 80 per cent complete and expressed the hope that it would be commissioned before November 2020.

“It is another source of power generation for us. So it has come to augment whatever power supply we have,” Mr Osman Oludiba Awuba, the Managing Director (MD) for the Northern Electricity Distribution Company Limited (NEDCO), said. 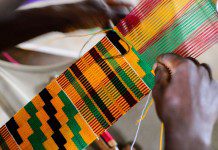 Government to set up Kente Village