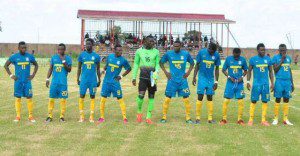 Latif Blessing emerged the Most Valuable Player claiming the Best Player and Golden Boots prize on the local scene of Ghana football as Medeama’s Kwasi Donsu and Abdul Basshiru of Dreams FC could not wrestle him for the award. But Accra Hearts of Oak’s Inusah Musah was awarded the defender of the season.

Latif scored 17 goals to emerge Goal King and Best Player of the season in 25 starts despite Kwasi Donsu’s magnificent performance which saw him score 15 goals with 10 free kicks.

Wa All Stars coach Enos Kwame Adepa won the coach of the season for guiding the side to win their first league trophy robbing off rivalry from Cioaba Aristica of Aduana Stars and Manuel Zacharias of Bechem United while their CEO, Oduro Nyarko won the CEO of the season beating competition from James Esselfie of Medeama SC and Albert Commey of Aduana Stars.

Richard Ofori of Wa All Stars also emerged the goalkeeper of the season for keeping 14 clean sheets in 25 matches while Abdul Halik Hudu of Inter Allies came up as the most promising player of the season.

In the other categories, Brong Ahafo Region Football Association Chairman Mr. Augustine Asante emerged the Match Commissioner of the season while Paul Abenyega was the PLB Cameraman of the season.

SuperSport was rewarded specially for the coverage of the league last season. Former PLB boss Welbeck Abrah-Appiah was honoured with the special Award.

Mayor of Accra gifts furniture to Accra Hearts of Oak