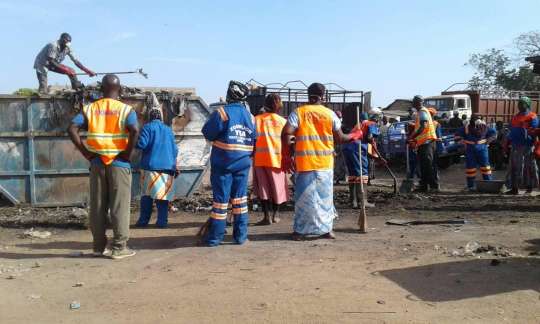 The Wa Municipal Assembly, in collaboration with the Dumba organising committee of the Waala Traditional Area, on Saturday embarked on a clean-up exercise in its bid to make Wa one of the cleanest cities in Ghana.

The exercise saw participants desilting major gutters and storm drains within the municipality as well as cleaning of some principal areas including the Wa Central Market and the Upper West Regional Hospital.

It was under the strict supervision of the Upper West Region Inter-agency Coordinating Committee on Sanitation (RICCS).

All shops were locked and businesses brought to a standstill until about 10 hours GMT when the exercise ended before usual economic activities resumed.

The security agencies including the Ghana Armed Forces, the Ghana Police Service, the Bureau of National Investigations, the Ghana Prison Service among others took part and ensured maximum involvement.

Mr Baba Mornah, the Wa Municipal Environmental Health Officer (MEHO), who spoke to the Ghana News Agency after the exercise, described it as success.

He said the goal of the activity was achieved since a lot of people including members of the Boys’ Scout drawn from the various second cycle institutions in the municipality such as the Wa senior High School, the Wa Technical Institute and the Wa Secondary Technical School among others participated.

“The Assembly will make sure it becomes a regular activity to be observed every first Saturday of the month to help ameliorate the effects of flood we experience in sections of the Municipality anytime it rains heavily” Mr Mornah added.

He said it will also reduce the incidence of sanitation related sicknesses such as cholera if they were able to sustain it.

The President Nana Addo-Dankwah Akufo-Addo led government introduced the National Sanitation Day initiative to be observed every first Saturday of the month as part of activities towards improving the sanitation situation in the country.