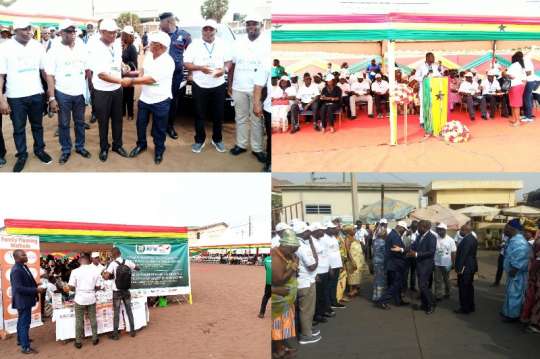 Similar event, the fifth edition of the campaign, was done at Kodjoviakope in the Republic of Togo on Monday dedicated to improving access to information on HIV and family planning.

Mr Abban said Ghana was privileged to be among countries benefiting from the implementation of the regional programme dubbed, “Reproductive Health and HIV Prevention in the Economic Community of West African States region,” through WAHO.

He said hundreds of people who crossed the border daily “have high need” for reproductive health services, especially during travel times and hopeful the project would address those needs and help reduce the spread of HIV and promote family planning.

He said the country’s Community Health Planning and Services (CHPS) enabled extension of primary care services across the country and that with the combined efforts, first time ever in Ghana, more than one in four women and girls in their reproductive age rate were using a modern method of contraception.

He said despite the modest achievements, fear of side effects, misconceptions and inadequate spousal support among others remained serious challenges that needed to be addressed.

Mr Abban said that was because family planning underlined people’s rights to determine the number of children and spacing by preventing unwanted pregnancies.

He said it prevented avoidable deaths and reduced the need for abortion, especially unsafe abortion.

The Deputy Minister said HIV was no longer a death sentence and called for concerted efoorts from all in the sub region to achieve agenda 90-90-90.

Dr. Kofi Busia, Director General of WAHO, in a speech read on his behalf expressed the hope that the project would help end the spread of HIV and other public health diseases.

Dr. Patrick Kuma-Aboagye, Acting Director General, Ghana Health Service also in a speech read on his behalf, said health was everyone’s problem and called for renewed commitment from communities across borders to achieve the target of 90-90-90, adding, “no need for complacency.”

There were fraternal messages from partners including, KFW- a German bank, UNFPA, USAID, and Planned Parenthood Association of Ghana.

ECOWAS and KFW are supporting the project.